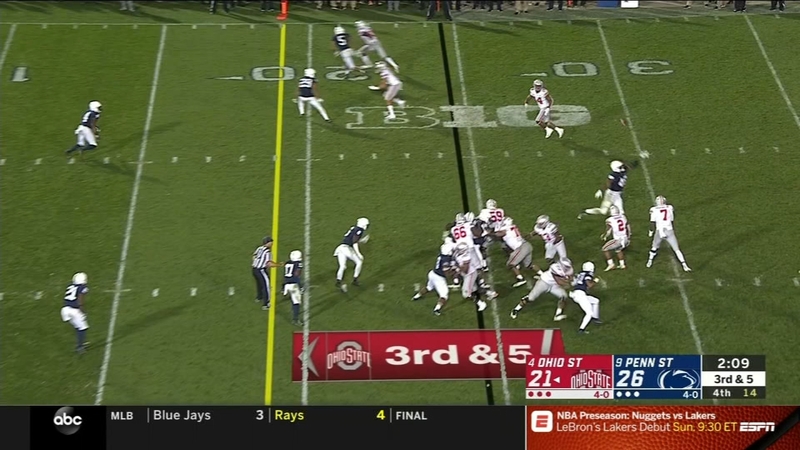 STATE COLLEGE, Pa (WPVI) -- Dwayne Haskins threw two touchdown passes in the final seven minutes as No. 4 Ohio State wiped out a 12-point deficit to beat No. 9 Penn State 27-26 Saturday night in another wild game between the Big Ten powerhouses.

The record-breaking crowd of 110,889 at Beaver Stadium was rocking, singing along to "Sweet Caroline" and "Livin' on a Prayer." It looked like the Nittany Lions would get another whiteout win against the Buckeyes (5-0, 2-0).

Instead, for the second straight season, Ohio State made a fourth-quarter rally from a double-digit deficit. Haskins connect with Binjimen Victor, who weaved and slipped through tacklers for a 47-yard touchdown catch and run that cut it to 26-21 with 6:42 left.

Penn State could not put the Buckeyes away with a closing drive but the Nittany Lions buried Haskins and Ohio State at their own 4 with 4:35 left on the clock.

A screen to J.K. Dobbins got 35 and took Ohio State out of the hole. Mixing runs and passes, the Buckeyes worked their way into Penn State territory. Haskins hit K.J. Hill with a quick pass to the outside and the receiver picked up a couple of blocks, broke a tackle and went in for a 24-yard score that made it 27-26 with 2:03 left.

McSorley and Penn State could not come up with a response. On fourth-and-5 from the Ohio State 43, McSorley handed off to Sanders on a read option and his was smothered by Chase Young, who had a huge game at defensive end for Ohio State.

Ohio State: Penalties and a propensity to give up long gains had dogged the Buckeyes early this season and both were a problem against Penn State. For the second time in September, the Buckeyes allowed a 93-yard touchdown, this time on a slant pass from McSorley to K.J. Hamler in the second quarter to make it 13-0. The Buckeyes finished with 10 penalties for 105 yard - and still won.

Penn State: The winner of this game has won the Big Ten the past two seasons. The Nittany Lions can still think conference title and College Football Playoff, but their road will be tough with games remaining against No. 21 Michigan State, No. 15 Wisconsin and No. 14 Michigan still left. And no tiebreaker against the Buckeyes.

Penn State receiver Juwan Johnson, who has had an issue with drops the first month of the season, made what could go down as one of the best catches of the season in the first half. Conjuring up comparisons to Odell Beckham's famous one-handed grab against Dallas in 2014, the 6-foot-4 Johnson reached high as he was falling back and made a spectacular right-handed grab for 31 yards down the sideline.

Ohio State is home to play Indiana next week.

Penn State is off next week before hosting No. 21 Michigan State on Oct. 13.