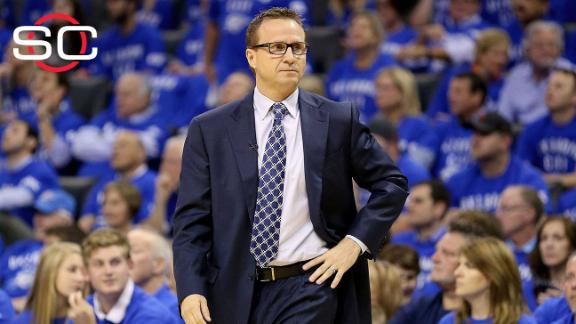 
"This is an extremely difficult decision on many levels," general manager Sam Presti said in a statement. "This decision is not a reflection of this past season, but rather an assessment of what we feel is necessary at this point in time in order to continually evolve, progress and sustain. We determined that, in order to stimulate progress and put ourselves in the best position next season and as we looked to the future, a transition of this kind was necessary for the program."

The Thunder missed the playoffs on the final day of the regular season this year, the first time they failed to make the postseason since 2008-09. The team was plagued with injuries, with reigning MVPKevin Durantplaying inonly 27 games.Russell Westbrookalso missed 15 games, andSerge Ibakadidn't play in the final 18.


"He led us, man," Durant said of Brooks. "He made sure everybody was emotionally stable because we had a lot of guys in and out of the lineup and he kept everybody together. That's what your head coach is supposed to do. I can't really say nothing about it because he did his job. He kept us together."


Durant posted further thoughts on Brooks' dismissal on his Instagram page and thanked his departing coach.

The decision to part ways with Brooks wasn't made in reaction to this season, but to help stimulate the organization forward into the future, particularly with Durant's looming 2016 free agency hanging over the team's head.


Brooks said at the team's annual exit interviews on Friday that he expected to return as coach next season. He had one year left on his contract that was signed in 2012, and a team option that ran through 2016-17.


"I looked at the option and studied the option of Scott returning very closely," Presti said in a news conference Wednesday night. "But it would've been entering the final year of a four-year contract and after a lot of thought and deliberation, and although I think Scott would've been very comfortable coaching on that, I did not feel we were in a position to make another long-term commitment based on what I felt was simply a natural need for transition."

According to sources, Presti made the call to fire Brooks without direct consultation from Thunder players.


"We wouldn't consult [the players]. I think that would be a terribly unfair position to put players in, to ask them to input on or make decisions on staff or personnel," Presti said. "Obviously they're aware of the decision, but they're not an active participant in that."


According to sources, while Brooks was well-liked by the team, many players are excited about the opportunity to have a new voice lead the Thunder.


Brooks was a key part in the Thunder's rise to contention, taking over for a team that started 1-13 under P.J. Carlesimo in the team's inaugural season in Oklahoma City. The Thunder dropped to 3-29, but recovered well enough for Brooks to shed his interim tag on the final day of the 2008-09 season. The Thunder then won 50 games the following season, earning Brooks coach of the year honors, and pushed the eventual champion Lakers to six games in the first round of the playoffs.


Sources told ESPN.com's Marc Stein that Brooks, meanwhile, instantly will become a candidate in both Denver and Orlando, which are the only two teams besides Oklahoma City to currently have an opening. Brooks is a well-known developer of young talent and has a prior relationship with Magic general manager Rob Hennigan, who worked under Presti with the Thunder.


"One's always sad when a colleague gets let go, obviously," Popovich said. "We're all in situations where it's pretty volatile and ever-changing, that's for sure. But Scotty Brooks has done a heck of a job, is a hard-working, talented coach; a good man. He won't have to wait very long to be a head coach again in the league. He's a quality guy."


NBA coaching sources continue to point to Billy Donovan and Kevin Ollie as prime candidates to succeed Brooks, given the close ties both have to Presti and Ollie's well-documented friendship with Durant. However Presti said in a Wednesday night news conference that the team has not reached out to anyone just yet.


"We haven't had any contact with anybody," Presti said. "I understand in these type of situations the speculation and the ether of social media, but no [we have not made any contact yet]."


Hours before Brooks was fired, Ollie released a statement saying he was committed to UConn and not looking for another job.


But Presti is also known as one of the most analytical and methodical team-builders in the league, which is expected to lead him to consider candidates beyond the two big names from the college game. One example of an out-of-the-box candidate isSan Antonio Spursassistant coach Ettore Messina, who ranks as one of the most successful head coaches Europe has ever seen and is well-regarded by Presti dating back to his days in theSpurs' front office.


Brooks had a .620 winning percentage with the team and guided the Thunder to five playoff appearances in seven seasons -- including three of the past four Western Conference finals and the NBA Finals in 2012.