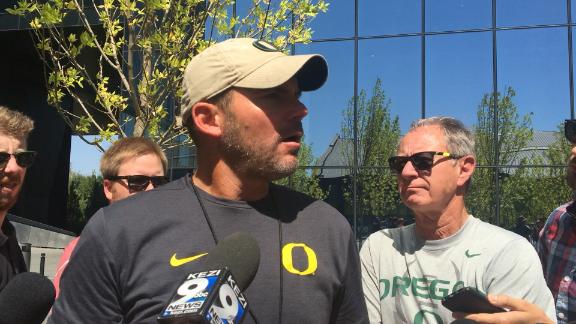 Quarterback Dakota Prukop will head into No. 24 Oregon's season opener against UC Davis as the starter.

Unlike Adams, who didn't join the Ducks until a few days into fall camp last season, Prukop arrived in Eugene early. He got to campus in January and went through all of the spring with the Ducks.

Through spring practices, the coaches gave looks to Prukop and redshirt freshman Travis Jonsen. Heading into the summer, coaches wanted to see Prukop get a better grasp on the play calling and playbook, while they wanted to see Jonsen become smoother running the offense. However, all signs pointed toward Prukop having the advantage of maturity and experience.

Early in fall camp, it appeared Prukop might not hold on to that advantage, as coaches said he was playing a bit carelessly and turning the ball over. Prukop finally settled in and established himself as the most consistent quarterback in Oregon's stable.

"I think his biggest thing in terms of being careless was just trying to win the job with every throw," Oregon coach Mark Helfrich said last week, "which is a very natural thing to do for a quarterback competition. The guys put a lot of pressure on every single throw. ... He has been better with the ball."

The biggest surprise on the quarterback depth chart is true freshman quarterback Justin Herbert landing as the team's second-stringer. The Eugene, Oregon, native, who arrived on campus this summer, was thought to be a distant fourth in the pecking order coming into fall camp, but he gradually garnered more praise from the coaches and players.

"He has really shocked me," Oregon wide receiver Dwayne Stanford said of Herbert. "Over the summer, I didn't know how he was going to look once he put on pads, but he has looked even better as fall camp has gone along."