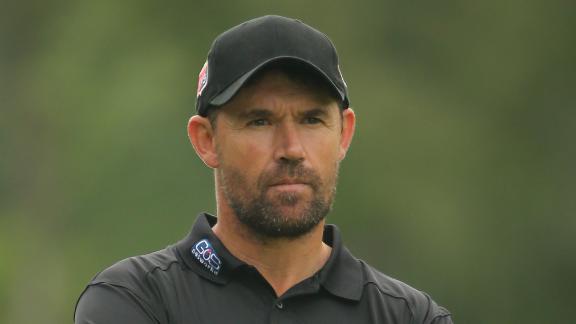 Ireland's Shane Lowry has topped the list of U.S. Open qualifiers, while Padraig Harrington will be watching from home for the first time in 15 years.

Lowry qualified a day after missing out by a shot in qualifying automatically for next month's championship.

Last month, Harrington also failed to qualify for the Masters for a first occasion in 14 years.

"The damage was done in the morning with that 75, and just made a few mistakes in not knowing the golf course, and I was never comfortable with the pace of the greens, as there was a number of three-putts thrown in there," he said.

Harrington will now take a week's break before returning to the PGA Tour for the June 5 start of the FedEx St. Jude Classic in Memphis.

Lowry shot rounds of a 3-under-par 69 on Walton Heath's New Course, then posted a 5-under 67 on Old Course for an 8-under total to finish a stroke clear among the 14 leading qualifiers in a starting field of 105 players.

It is the second time in five attempts the 26-year-old Dubliner has been successful at Walton Heath in qualifying for a U.S. Open.

The double-European Tour winner had secured his biggest paycheck in finishing runner-up to good friend Rory McIlroy in Sunday's concluding BMW PGA Championship at Wentworth, where a win would have seen Lowry having to avoid teeing up at Walton Heath.

However, Lowry continued his good form at Walton Heath despite the wet, cold and miserable conditions.

"I played OK and putted really, really well holing a lot of 6- to 8-footers for par," he said. "But after finishing so close to victory yesterday, I just carried a lot of momentum from Wentworth into today to get the job done.

"And while I was a little disappointed not to win the BMW PGA, at least now I've done it the hard way so that I can join Rory at Pinehurst."