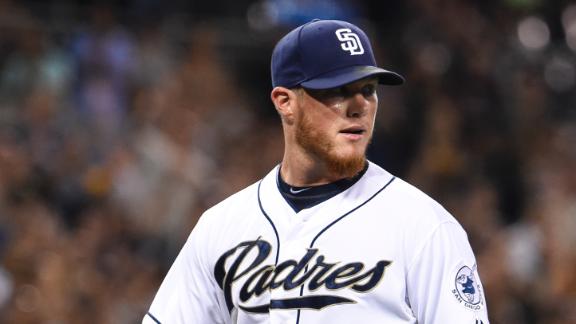 The San Diego Padres traded for closer Craig Kimbrel just hours before the season started in April. Now they could be about to move him, hours before Friday's 4 p.m. ET trade deadline.

The Padres spoke overnight with both the New York Yankees and Houston Astros about deals involving their All-Star closer, sources told ESPN.com, and were attempting to come to an agreement on prospects and how much of the approximately $29 million remaining on Kimbrel's contract each team would pick up.

The Yankees are believed to be willing to assume all of Kimbrel's money, but are balking at including their most highly coveted prospects -- either pitcher Luis Severino, outfielder Aaron Judge or first baseman Greg Bird.

The Astros and Padres are said to be working on a potentially larger deal that could include both Kimbrel and one of the Padres' controllable starting pitchers, Tyson Ross or Andrew Cashner.

It isn't known how much money Houston can absorb in any trade with San Diego. But the Astros did take on all of the approximately $12 million left on outfielder Carlos Gomez's contract in their trade with Milwaukee on Thursday night.

The Astros, battling the Angels for first place in the AL West, also acquired left-hander Scott Kazmir in a trade with Oakland last week.

Kimbrel reached 30 saves for the fifth consecutive season Thursday, tossing a clean ninth with a strikeout in an 8-7 victory over the Mets. He hasn'tallowed a hit and only one walk in his last seven outings.