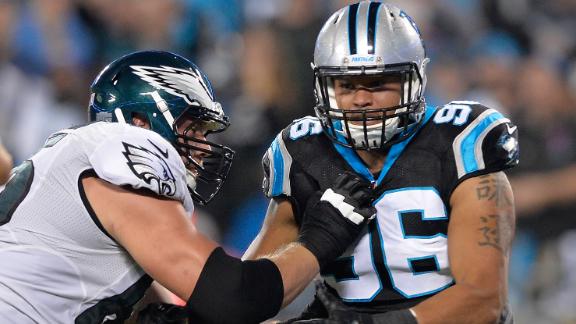 Horton's suspension begins immediately. He will be eligible to return following the team's Dec. 20 game against the New York Giants.

Horton started one game this year but was inactive on Sunday. He was cut by the team after Week 3 and then brought back for Week 5. Horton's playing time was due to be significantly reduced with defensive end Charles Johnson expected to be activated this week from injured reserve with a designation to return.

In addition to Horton, wide receiver Stephen Hill was also suspended one game. Hill's suspension stems from a July incident in which he was stopped and cited for possession of marijuana.

Hill, who is on injured reserve, will also serve his suspension immediately. The Panthers placed Hill on IR after he suffered season-ending knee injury in training camp.

The Panthers (10-0) will face the Dallas Cowboys on Thursday.