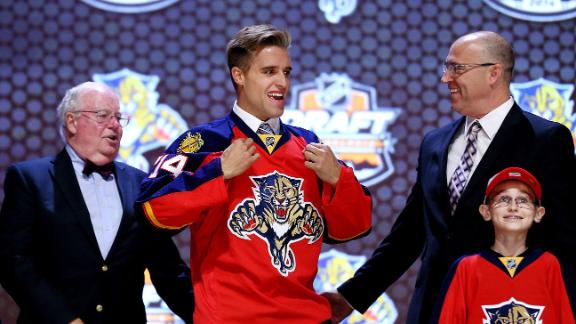 The Florida Panthers signed defenseman Aaron Ekblad, the top overall pick in the NHL draft, to a three-year, entry-level contract on Wednesday, the team announced.

- Aaron Ekblad (@EK5Colts) September 3, 2014"We are very pleased to have signed Aaron," general manager Dale Tallon said in a release. "He is a talented, strong, smart and hardworking defenseman who is ready to take the next step in his professional career. We look forward to watching him compete and develop at our prospects camp, throughout our main training camp and in preseason competition."

Ekblad, 18, had sustained a concussion in an exhibition game on Aug. 4 during Canada's world junior summer development camp. He is expected to be ready when the Panthers open their prospects camp on Sept. 11.

The rest of the team begins training camp under new coach Gerard Gallant on Sept. 18.

Ekblad was a standout for the Ontario Hockey League's Barrie Colts last season, scoring 23 goals and tying for fifth in the league with 53 points.