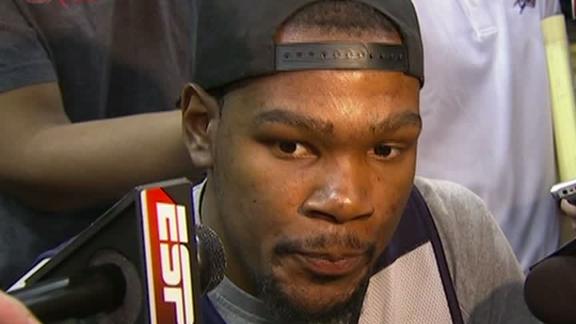 MEMPHIS, Tenn. -- A headline in The Oklahoman focusing on Kevin Durant's struggles in the Oklahoma City Thunder's series with the Memphis Grizzlies has caused a distraction before the team faces an elimination game Thursday night.

The headline, which read "Mr. Unreliable," in part referred to Durant's recent slump, which has him shooting just 40 percent in the series and 15-of-45 over the past two games. The headline generated strong reaction and led Oklahoman sports editor Mike Sherman to issue an apology, saying in a statement the "words were overstated and unduly harsh."

He clarified that the headline was focused on Durant's play against Memphis, rather than the NBA scoring champion's body of work.

"I'm unreliable? Me, Mr. Unreliable?" Durant said Thursday morning. "As a competitor there's going to be good and bad days. They're going to build you up, they're going to break you down. You just have to stay even keeled, and that's what I am. It's all about what have you done for me lately, and I understand that."

- Wanda Pratt (@MamaDurant) May 1, 2014Thunder GM Sam Presti pointed to the $1 million donation Durant made to help recovery efforts in Moore, Oklahoma, after tornadoes devastated the town last year as an example of just how reliable the superstar is to the state that he plays in.

"What I witnessed from Kevin Durant on the streets of Moore, Oklahoma, a year ago is the absolute definition of reliability," he told the Oklahoman.

Durant said recently that he has been ignoring sports coverage and social media during the playoffs, but he was shown the headline after the team's morning walk-through. Several other players saw it as well.

Durant is likely to be named the league's most valuable player within the next week after a career season that saw the Thunder earn the No. 2 seed in the Western Conference playoffs. But against Memphis he's had four consecutive games shooting under 50 percent from the field, the first time that has happened since January.

"There's a lot of things you can say about him," Thunder coach Scott Brooks said, "but [unreliable] wouldn't be one of them."