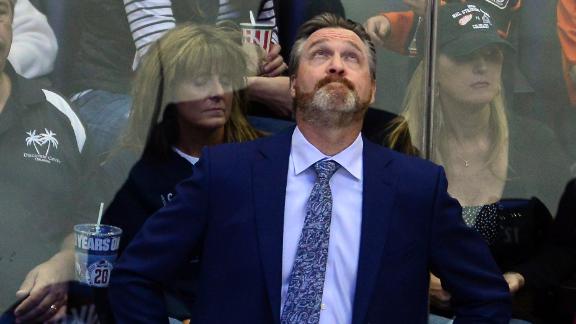 Saying that he doesn't have enough of a "say in the decisions that impact the team's performance," Patrick Roy resigned as coach of the Colorado Avalanche on Thursday.

He issued a statement that also said he was not on the same page with the organization.

"For the past three years, I have carried out my duties as Head Coach and Vice President of Hockey Operations for the Colorado Avalanche with energy, passion and determination," Roy said in the statement.

"I have thought long and hard over the course of the summer about how I might improve this team to give it the depth it needs and bring it to a higher level. To achieve this, the vision of the coach and VP-Hockey Operations needs to be perfectly aligned with that of the organization. He must also have a say in the decisions that impact the team's performance. These conditions are not currently met.

"Today, I am informing you of my decision to leave the Colorado Avalanche organization. Though it saddens me, I have put much thought about this decision in recent weeks and have come to be fully comfortable with it.

"I am grateful to the Colorado Avalanche organization, with which I remain in good terms, for letting me lead this great team. I thank all the players I have had the pleasure of coaching and the fans for their unwavering, unconditional support.

"I remain forever loyal to the Avalanche with which I played 478 games, coached another 253, and won two Stanley Cups."

Roy has coached the Avalanche for three seasons. He was named coach of the year his first season after leading Colorado to 112 points and a first-place finish. But the Avs lost that year in the first round of the playoffs to the Wild and have not returned to the postseason since.

Roy was critical of some of his players last year, blasting forward Matt Duchene for his exuberant celebration of his 30th goal in a 5-1 loss.