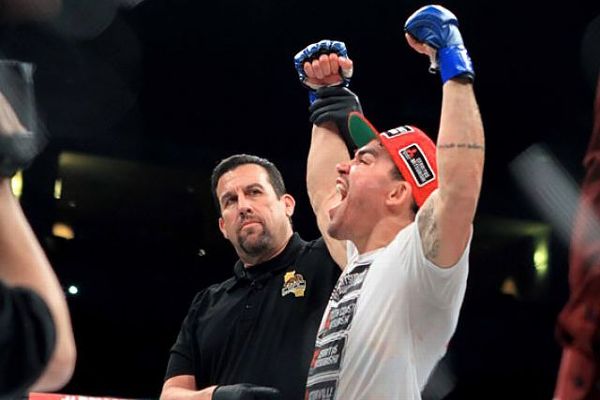 Earlier Saturday, Bellator was forced to cancel its original heavyweight headliner between Fedor Emelianenko and Matt Mitrione, after the latter was declared unfit to fight due to kidney stones. As a result, a lightweight co-main event featuring Thomson, a San Jose native, was promoted to the main attraction.

Thomson (22-9) was unable to get anything going against Freire (18-8), however, and ultimately went down for good 40 seconds into the second round after taking a hard uppercut.

It is just the second knockout loss of Thomson's 16-year professional career.

For Freire, it's a solid bounce-back from a first-round knockout loss to current champ Michael Chandler in June.

Freire, of Natal, Brazil, stalked Thomson with the right hand from start to finish. Thomson, 38, looked to dictate the fight with frequent leg kicks and occasional takedown attempts, neither of which were very effective.

The finish came moments after the two accidentally clashed heads, with Thomson taking the worst of it. After that collision, Thomson attempted to shoot into Freire's hips for a takedown, and the Brazilian met him head-on with a right uppercut.

It wasn't the only big punch of the fight for Freire, who now has 12 career wins by knockout. In the first round, Freire floored Thomson with a looping right hand.

A former Strikeforce titleholder, Thomson drops to 2-1 in Bellator. Freire improves to 3-1 in his last four fights and eyes a rematch with Chandler for the lightweight championship.

As far as the canceled fight between Emelianenko and Mitrione, Bellator MMA president Scott Coker said the promotion is looking to rebook it in May or June in San Jose.

Kongo picks up fourth win in a row, dominates Thompson

Kongo, 41, traded a few punches with Thompson early, but relied mostly on his wrestling and ground-and-pound to dominate the fight. Kongo hurt Thompson badly at the end of the first round and was in the process of landing potentially fight-ending knees from the clinch when Thompson was saved by the bell.

The second and third rounds were complete blowouts for Kongo, as he easily dragged Thompson to the floor and worked from the top position. The French heavyweight is now 8-2 in Bellator with a four-fight win streak (all four have gone the distance).

Eighteen months after signing a multifight deal with Bellator, welterweight Josh Koscheck (17-11) finally made his promotional debut against Mauricio Alonso (13-7).

Koscheck, 39, looked rusty and every bit his age as he suffered a first-round TKO loss to Alonso at the 4:42 mark of the opening round. A right cross briefly knocked Koscheck down before Alonso's right uppercut finished the job.

Fighting out of Fresno, California, Koscheck missed all of 2016 due to injury. He struggled greatly with Alonso's height and reach advantage and got caught leaning in on multiple right-hand attempts. A former collegiate wrestler, Koscheckdid not seem interested in taking the fight to the ground, surprisingly.

Alonso, of Brazil, sat back at his range, successfully countered, and jumped on the opportunity for a finish.

Koscheck has lost six in a row, three by knockout. He did not go unconscious Saturday night, but lowered his guard and covered up his eye after eating the final uppercut.