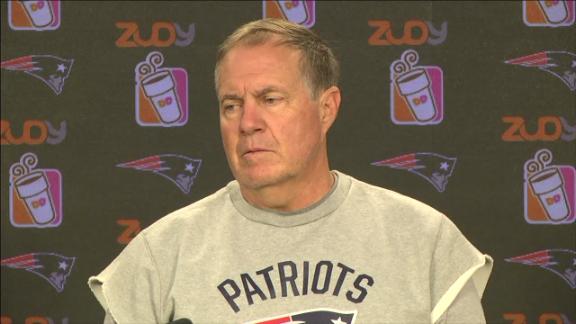 FOXBOROUGH, Mass. -- In a sign that injured New England Patriots quarterback Jimmy Garoppolo could be active for Thursday night's home game against the Houston Texans, he was a limited participant in practice Tuesday, just two days after spraining the AC joint in his right throwing shoulder.

Garoppolo was not present at the start of practice when reporters were present, so it appears the Patriots had him take the field after media members departed.

Meanwhile, the club had free-agent quarterbacks T.J. Yates and Sean Renfree in for workouts, according to ESPN NFL Insider Adam Schefter, but did not make a move with either of them.

That could be another indication that Garoppolo's chances to be active for Thursday's game between the 2-0 Patriots and 2-0 Texans are rising.

On Monday, offensive coordinator Josh McDaniels said the team's approach would be contingent on how things progressed with Garoppolo.

"I'm sure if he can't play or back up, then we'll be going through that process [of considering replacements]," McDaniels said on sports radio WEEI. "It's a short week [of preparation], we're going to have to work hard to get somebody ready to go in case that does happen."

Early Tuesday morning, ESPN NFL Insider Ed Werder reported that the Patriots still believed there was a chance Garoppolo could tolerate the pain of the AC joint sprain.

Later Tuesday morning, head coach Bill Belichick shed little light on the team's thinking, as his news conference turned testy at times as he deflected several questions on the topic.

"I'm a football coach; I'm not a doctor," Belichick said when asked how he juggles some uncertainty with Garoppolo's health and roster decisions. "The medical staff is the medical staff. I coach the team; the medical people handle the injuries. They don't call plays. I don't do surgeries. We have a great deal there. It works out good."

Peppered with questions about Garoppolo, Belichick began to lose patience with one reporter.

Later, Belichick added: "Let me put it a different way -- I'm the coach, I do what's best for the football team. I don't know why we can't understand that."

Speaking in general terms, Belichick didn't rule out the possibility that a quarterback could be a game-time decision.

Also Tuesday, tight end Rob Gronkowski, who has missed the first two games as he tries to overcome a hamstring injury suffered in August, showed up for practice in full pads. He explained that he wanted to get a feel for the pads, which he hasn't worn for some time, but that he later had to remove them.

Gronkowski was a limited participant. In addition, linebacker Dont'a Hightower was limited in practice Tuesday after missing all last week and Sunday's game with a knee injury. He wore a brace over his right knee.

As for the two quarterbacks the Patriots worked out Tuesday, it marked Renfree's second workout with the club over the past month.

Meanwhile, Yates' agent, Brian Ayrault, announced on Aug. 30 that Yates has been cleared to return to football activities after tearing his ACL last December. Yates suffered a torn ACL last December when the Houston Texans played the Indianapolis Colts in Week 15.