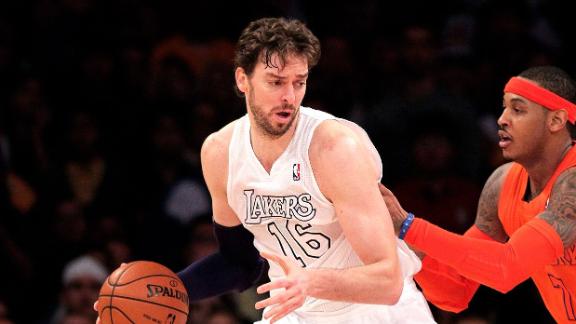 It was the latest in a series of pitches to Gasol by members of the Thunder organization. The courtship began last week with a phone conversation between general manager Sam Presti and the two-time NBA champion on Tuesday, followed up by a tag-team face-to-face appeal from Kevin Durant and Russell Westbrook on Wednesday.

Despite the Thunder's persistence in trying to persuade the 34-year old Spaniard to play alongside his Spanish national squad teammate in Serge Ibaka and the reigning MVP in Durant, a league source told ESPNLosAngeles.com on Tuesday that Oklahoma City considers acquiring Gasol a "long shot."

Oklahoma City is limited to roughly $5 million in spending cash under the luxury-tax line to offer Gasol, but had hoped its position as a championship contender -- coming off a Western Conference finals appearance in the spring -- would speak to Gasol more than money.

During Gasol's meeting with Brooks, according to a league source, the 13-year veteran peppered Brooks with questions about the quality of life in Oklahoma City and wondered aloud about leaving a culturally diverse city like Los Angeles for middle America.