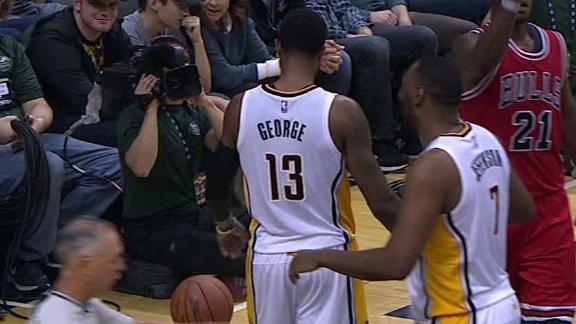 INDIANAPOLIS -- Pacers small forward Paul George was ejected from Saturday night's game against the Chicago Bulls after he kicked a ball into the stands and it hit a fan in the face.

After the game, George apologized for the incident.

"I meant to kick the ball against the mat, the stanchion, I guess," George said after the Pacers' 111-94 win over the Bulls. "And my soccer skills isn't as good as I thought. I apologized to the people who I hit, and I'm glad my team was able to pick up this win and me not be at fault for the loss."

The play occurred with 1:42 remaining in the third quarter, after George was called for a foul. With the ball still bouncing on the floor, George kicked it into the first few rows of seats.

"Sure, I'll get a fine," George said. "It happened. But most importantly, we got a good win tonight."

George said when he apologized to the fan, she told him she was OK.

George's ejection caught many by surprise, considering it resulted in the first ejection of his career.

"It looked like he got frustrated with the call and kicked the ball," Pacers coach Nate McMillan said. "And whenever you punch or kick a ball [and] it goes into the stands, that's an automatic ejection."

"I hope not," McMillan said. "Emotions took over in that situation, and he knows that's something he can't do. That's an immediate ejection."

George finished with 13 points, seven rebounds and three assists. He calmly fielded questions in front of his locker after the game and said he's hopeful he can move past the incident.

"It happened," George said. "[I'll] move forward from it. I'll learn. Again, grateful that we won this game and that ejection didn't cost us."

Paul George gets ejected for kicking ball into the stands
After a foul is called on him, Paul George expresses his frustration by kicking the ball into the crowd, and it hits a fan in the face. George gets ejected from the game but apologizes before walking off.
Related topics:
sportsespnstandsballfanpaul georgekickindiana pacersejectionnba
Copyright © 2022 ESPN Internet Ventures. All rights reserved.
TOP STORIES
Fire on roof sends smoke billowing over Center City
5 hospitalized after car crashes into utility pole in Montco
After the omicron wave, what's next for the COVID pandemic?
Police investigate 2 deadly hit-and-run crashes in Philly
Car crash sends vehicle into side of home in Lawndale
CDC warns about counterfeit N95, KN95 masks
AccuWeather: Feeling Better Today
Show More
Car flips over guardrail, lands in woods in Haddon Township
Police: Man shot, killed in Philadelphia's East Falls section
All 100 lab monkeys accounted for after several escape crash
Montco health department ties 10 hepatitis A cases back to restaurant
Arnold Schwarzenegger involved in multi-vehicle crash
More TOP STORIES News