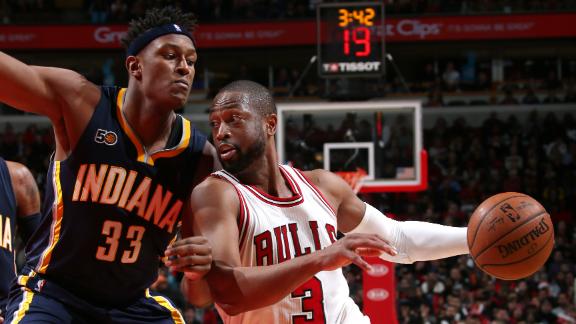 CHICAGO -- Indiana Pacers star Paul George says his team is the "little brother" of the NBA. George voiced his frustration regarding a lack of foul calls after Monday's 90-85 loss to the Chicago Bulls. George finished the game with 14 points in 39 minutes, but it was the fact that he went to the free throw line just once that really irritated the All-Star and his coach Nate McMillan.

George was asked if he felt that things would be different if he played for a big-market team.

A few moments earlier, McMillan aired out his frustration with the officiating, pointing to the discrepancy between the Bulls' foul shots and the Pacers' perceived inability to draw a whistle.

"We only shot 10 free throws," McMillan told reporters. "Paul shot one free throw the entire game [and] played 39 minutes. This is the second game where he's getting a lot of grabbing, a lot of holding. [Bulls swingman] [Jimmy] Butler shoots 12 free throws tonight. [Opponents] are getting away with a lot of grabbing on Paul. [The referees] got to call the game both ways."

"It's not even superstar treatment," McMillan said. "He's playing -- call it fair. I'm not talking about superstar treatment. With those guys, you got to be aggressive [defensively]. The players that are really good in the league, you got to be aggressive and you play physical, and that's the way [opponents] play him. He's not getting any calls. I think it's ridiculous that he plays 39 minutes and he shoots one free throw. [The Bulls] shoot 28 free throws, we shoot 10. They got to call the touching and that physical play on both ends."