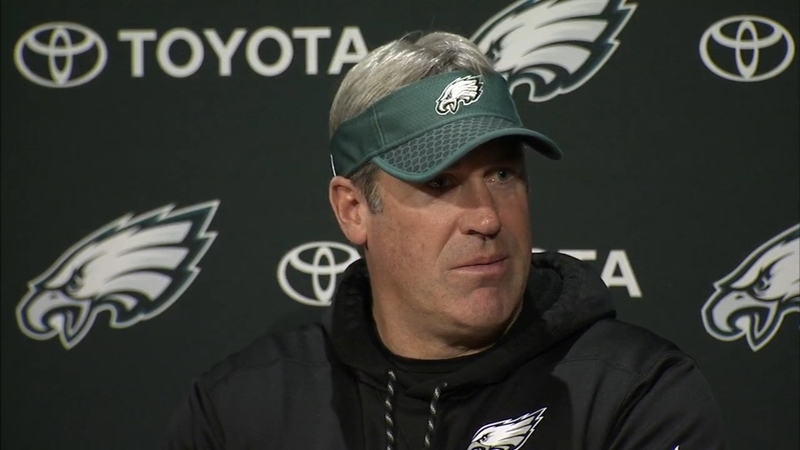 PHILADELPHIA (WPVI) -- You might be asking yourself, 'Who would have thought the Eagles would be one win away from the Super Bowl?'

The head coach spoke to the media on Friday, just two days before the NFC championship game against the Minnesota Vikings.

Pederson said he doesn't have a crystal ball, but said he saw talent during training camp... and here we are!

Now, as the team gets ready, Pederson said it's important to stick to the plan.

"Nothing really has to change. At the end of the day it's football, and I've got to make sure my head is in the right spot. I'm blocking out the noise, just like I'm telling the players to block it out. And I'm focused on my job and helping this team win a football game," he said.

"I try not to get caught up in the magnitude of what this game really means, but when you have time away and you can really reflect not only on the season, but where this team is and the things we've faced all year, it really does put it in perspective," Pederson continued.
Pederson says over the last two years he is wiser and he is smarter, but his focus right now is winning the day.

Meanwhile, quarterback Nick Foles said the team is getting better every day!

#Eagles QB Nick Foles says the more he practices and plays with the starters the more confident and comfortable he feels#NickFoles #Eagles #FlyEaglesFly pic.twitter.com/efinerBGcg

“That’s why we play the game is ultimately win a Championship, get to the Super Bowl... this fan base is amazing! [Philly] has always had a special place in my heart”#Eagles #FlyEaglesFly pic.twitter.com/092avFKy71