Pelton mail: Which teams should make a deal for Jahlil Okafor? 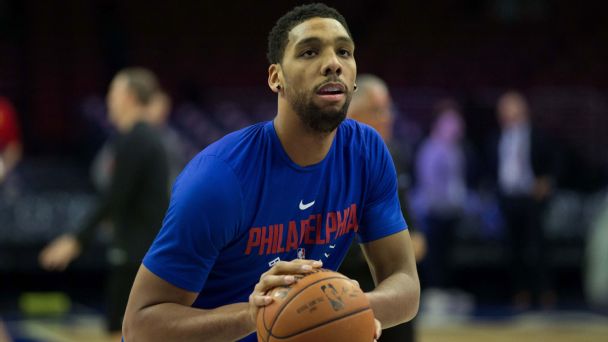 This week's mailbag features your questions on Jahlil Okafor's next move, Lawler's Law and more.

"Is there a good reason [other than luxury tax reasons, which are obviously not trivial] for a team like the Cleveland Cavaliers or, on the other end, the Chicago Bulls[and others] to not offer a future second-round pick or some nominal asset for Jahlil Okafor?"

I don't think I would have much interest in trading for Okafor. His track record of the Philadelphia 76ers playing far worse with Okafor on the court makes him a nonstarter for teams looking to win now, particularly at his relatively high $5 million salary. There are plenty of surer things at center who can be had cheaper given the current excess of capable players at the position.

Trading for Okafor makes far more sense for a rebuilding team, with the Bulls, Brooklyn Nets and Phoenix Suns the three most reasonable options. Still, his long-term upside is limited, because if Okafor plays well the rest of the season, he'll have to be re-signed as an unrestricted free agent. (A team that acquires Okafor via trade would also be limited to paying him $6.2 million next season, the amount of the 2018-19 team option the 76ers declined.)

I'd be much more interested in adding Okafor as a free agent, with the potential to give him a long-term deal that allows the team to capture whatever upside he might display in a new situation. And, of course, that would come with the added benefit of not giving up anything in return.

This question is a few weeks old, so Andre Drummond has stretched it to 28-of-36 during the regular season (77.8 percent) after making 14 of his 16 attempts in Friday night's win over the Milwaukee Bucks. Add in Drummond's 16-of-20 preseason and he's at 78.6 percent over 56 free throw attempts this season -- more than double the 38.6 percent Drummond shot at the foul line in 2016-17.

Coming into the year, my SCHOENE projection system forecast 40.1 percent free throw shooting from Drummond, an improvement on last year's 38.6 percent mark thanks to regression to the mean. Factoring in his start improves Drummond's projection only to 42.3 percent, which feels much too low given how incredible his accuracy has been so far.

I suspect my model isn't quite sensitive enough to the magnitude of improvement we've seen from Drummond. According to Basketball-Reference.com's play-index, Drummond had never in his career made more than 12 free throws in a span of 16 attempts before Friday night. And the odds of a 40.1 percent shooter shooting as well as Drummond has thus far in the regular season or better are about 1 in 500,000. Even considering the Wyatt Earp effect, that's still compelling evidence that his underlying ability has changed dramatically.

I don't think Drummond will continue to shoot nearly this well, but I'd give him better than even odds of shooting better than 50 percent from the free throw line the rest of the season, which would be an enormous improvement and would make him less vulnerable to intentional fouling by opponents -- something they've yet to do this season.

I think any time a player has extremes in terms of both strengths and weaknesses, they're difficult to value because it depends how much weight you put on those respective skills. (This is true from a statistical standpoint too: Rubio doesn't fare as well in usage-driven PER, where he's generally rated closer to league average.) In Rubio's case in particular, the focus of critics is on what he can't do in terms of shooting and finishing rather than the playmaking and defense he brings to the table.

Finding consensus on Rubio's value has also perhaps been challenging because much of it comes at the defensive end of the court, where he fights stereotypes about European guards. It has taken a while for Rubio to generally be acknowledged as one of the league's better defensive point guards.

Some skepticism about Rubio will probably always persist until we see him succeed in a playoff setting, and that's not unfair. There is a tendency for players with imbalanced skill sets to be less valuable in a playoff series, where facing the same opponent repeatedly allows teams to key in on weaknesses and highlight them while trying to take away strengths. So we'll see if the Utah Jazz can get there and we finally get a look at playoff Rubio. (Or if he keeps shooting 37 percent on 3s, rendering the discussion moot.)

"Would the NBA ever consider making a rule change whereby 3-point shots go into effect in the last three minutes of a quarter or a half only?"

You may recall that back in 2004-05, when it was still known as the NBA development league, what is now the G League experimented with precisely this rule: 3-pointers counted only in the last three minutes of quarters and overtime. The experiment lasted a single season, during which scoring went down from 98.9 points per game to 96.5. (Intriguingly, the leaguewide offensive rating was actually almost unchanged, but pace of play fell dramatically before speeding up in 2005-06.)

I'd say I'm not a big fan of the idea. Having the same shot be worth differing point values depending on the time feels too "Rock N' Jock" for me, and also confusing for scorekeepers, broadcasters and other observers. I also think the game would be less entertaining without the spacing the threat of the 3 provides, although your mileage may vary. If the goal is reducing the importance of the 3-pointer, I think moving the line back -- and presumably removing the corner 3 in the process -- is a better solution.

"One thing that has annoyed me for quite some years is when I hear Ralph Lawler, LA Clippers commentator, say that the first team to score 100 is the one that wins ['Lawler's Law']. Obviously, that's extremely arbitrary and unlikely to be true. What do the statistics say -- what percent of the time do teams that score 100 first actually go on to win the game? Are you as annoyed as I am by Lawler's claims?"

Hey Mike, I think you might be taking the legendary Clippers broadcaster a little more seriously than he actually intends. I must say I enjoy Lawler's Law, even if it falls short of the certainty that would be required to make something doctrine. After all, the team that scores 100 first does win the overwhelming majority of the time.

I had not realized before looking it up that there's actually a website devoted to tracking Lawler's Law, which indicates it has been accurate 93.6 percent of the time since 1996-97. Because teams are scoring more points now, Lawler's Law is somewhat less likely to hold: Teams reaching 100 first won just 90.1 percent of the time in 2016-17, the lowest mark in that span.