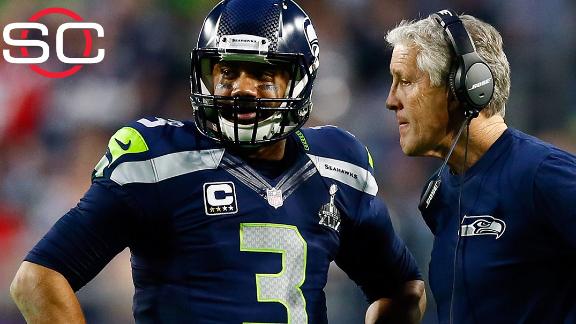 RENTON, Wash. -- Seattle Seahawks coach Pete Carroll would not speak directly about the contract negotiations with quarterback Russell Wilson, but Carroll did say Tuesday he and Wilson have had good conversations.

"So hopefully we'll get something done," Carroll said. "But if we don't, we'll just have to deal with that. But we're very close in our conversation and our exchanging process through this. Our communication has been great."

When asked the likelihood of a deal getting done worked out before training camp begins in late July, Carroll said, "I don't know. I'm not talking about that right now."

Wilson was absent from the first day of organized team activities Tuesday because he attended a funeral in Florida. Wilson was supporting teammate Jimmy Graham, whose personal manager, Tammy Meyerson, died Friday.

Wilson is scheduled to make $1.5 million this season in the last year of his rookie deal. He is believed to be seeking a multiyear deal in excess of $100 million.

Carroll was asked how Wilson is dealing with the contract situation.

"I think as much as anybody can deal with it, Russell will," Carroll said. "We've talked a lot about the process of it and all of that and the expectations. He's had a great offseason. He's looked incredibly in-shape and faster than ever. He's worked great on the field when he's been with us. He's really set his mind to it. The proof is in the action of what he can put out there. He's on it."