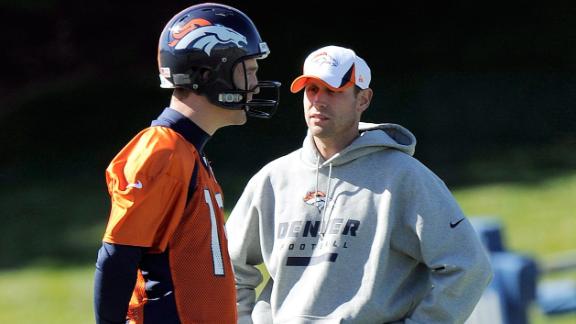 ENGLEWOOD, Colo. -- As far as references go, a 14-time Pro Bowl selection headed for the Hall of Fame whose name is carved into plenty of pages in the NFL's record book is a pretty good one.

And Denver Broncos quarterback Peyton Manning believes offensive coordinator Adam Gase would make a quality NFL head coach. Manning said Wednesday following the team's practice that he's told NFL teams as much when they've asked and is ready to do so again.

Gase, in his second season as the Broncos' playcaller, is scheduled to interview with the San Francisco 49ers, Atlanta Falcons and Chicago Bears on Friday and Saturday in the Denver area.

"I don't think you need me to sit up here and campaign for him, I guess,'' Manning said. "Last year I talked to a couple teams on the behalf of him that reached out to me. That may happen again, so I'm certainly glad to share my thoughts, I mean it's pretty well documented my thoughts on him because I don't think he needs me to stand up here and campaign for him. I'm excited he has the opportunity he's going to have this week. He deserves it, I think teams that he talks to will be impressed.''

Gase drew interest from teams last season, most notably from Cleveland, but he told the Browns he wanted to wait until the Broncos' season was over before interviewing. And by the time the Broncos had played in Super Bowl XLVIII, the Browns had already hired Mike Pettine.

This time around, Gase has elected to interview in the allotted window for assistant coaches with teams that have a bye in the first week of the playoffs.

"Different year for me this year,'' Gase said. "Felt like this was the right choice for me to do this weekend. Once it's over we'll move on to whoever we're playing.''

"[These are] opportunities he deserves,'' Manning said. "... Adam's always had his priorities in the right order ... He deserves it.''

The Broncos, who practiced Tuesday and Wednesday, will have Thursday, Friday and Saturday off before they are to return Sunday morning to the team complex for meetings and a workout with the strength and conditioning coaches.

Gase is a popular candidate given his work in a variety of different offenses, his work with the likes of Nick Saban and Mike Martz -- national championship and Super Bowl winners, respectively -- along with a rsumthat includes work in personnel as well as being a position coach.

"It's a great opportunity to be able to do this,'' Gase said. " ... I'm excited about it, but I'm also excited the fact we've got another chance to make a run. We've got a good team.''