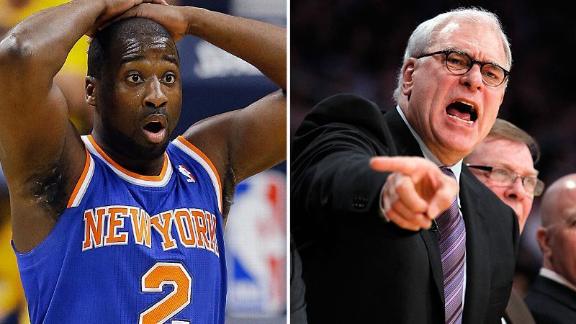 New York Knicks president Phil Jackson recently told point guard Raymond Felton that he will look to trade him in the offseason, a league source said.

Felton has two years remaining on a four-year, $15 million contract with a player option in the final season, so it may be difficult to find suitors for him.

But Jackson told Felton in a conversation the two had during exit interviews last month that he would explore trade possibilities involving the 29-year-old.

"He was pretty honest with him," the source said. The conversation was first reported by SNY.tv.

A league source said the Knicks will show interest in free agent Steve Blake, potentially to bolster their depth at point guard if Felton is traded.

Felton struggled with injuries this season, missing 17 games to various ailments. When healthy, he delivered an uneven performance for a Knicks team that won just 37 games and missed the playoffs for the first time in four years.

Felton also dealt with off-the-court issues in 2013-14. He was issued two felony gun charges in late February and is scheduled to appear in court on June 2, at which time jury action may take place.

According to a criminal complaint provided by the Manhattan District Attorney's Office, Felton was in possession of an FN model 5.7x28 millimeter caliber semiautomatic pistol loaded with approximately 18 rounds of live ammunition.

The league may seek to suspend Felton after the legal proceedings conclude. There is also a possibility that the Knicks will look to void Felton's contract because of a morals clause in the deal, although that likely would be met by a legal challenge from the players' association.

If Jackson is unable to trade Felton in the offseason, it may create an awkward scenario. He'd have a point guard on his roster who is well aware that the team would prefer he played elsewhere.

If the Knicks signed Blake, the veteran point guard would be the second former Laker to join the roster since Jackson's arrival. Jackson signed Lamar Odom to a two-year deal (second year non-guaranteed) before the end of the regular season.

Blake played for Jackson in Los Angeles in 2010-11. The 10-year veteran averaged 6.9 points and 5.6 assists in 27 minutes this season for the Lakers and Golden State Warriors.