Philadelphia Flyers' start is for real; Edmonton Oilers' sluggish start not so much 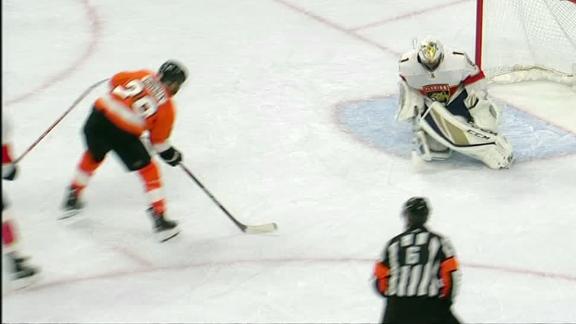 Which surprising team has the goods to be around at the end of the season?

Greg Wyshynski: The Philadelphia Flyers seemed to be about a year away from making a big playoff push, but they also seemed like a team that could surprise this season if their atrocious 5-on-5 offense (fourth fewest goals scored in 2016-17, at 128) and team save percentage (fifth worst in 2016-17, at .901) improved.

So far, the results are intriguing. They're 4-2-0, and their offense looks better. The Flyers are eighth in even-strength offense (3.08 goals per 60 minutes, per Corsica) and are second in goals per game (4.33) through six games -- although, granted, that 8-2 dragging of the Washington Capitals boosted that number. Captain Claude Giroux looks like himself again with nine points. Wayne Simmonds has five goals. Shayne Gostisbehere has 10 points, six of them on the power play. As for the goaltending, both Brian Elliott (.924) and Michal Neuvirth (.957) have played well at even strength, though they've suffered along with the Flyers' penalty kill (76 percent).

The Metro looks a little more wide-open than anticipated. While the New Jersey Devils are fun but probably unsustainable, the Flyers are fun and potentially a divisional playoff team -- especially if the Capitals are suddenly human and the New York Rangers are as middling as they've appeared to be in the early part of the season.

Emily Kaplan: Taking a different approach here: I'm picking a team that has surprised in a bad way but should do just fine. For me, that's the Edmonton Oilers. My Western Conference favorites have dropped to 1-4 after a 5-3 loss to the Hurricanes on Tuesday night. They've allowed 19 goals in a four-game losing streak, and goalie Cam Talbot has been yanked twice in his past three starts, with a 5.92 goals-against average and .836 save percentage. The good news? It shouldn't get worse than this. It can't. Leon Draisaitl (concussion) could return as early as this week. Connor McDavid is still Connor McDavid. But more important is how they're constructed. Later this week we're unveiling a cool project at ESPN.com in which I polled league insiders on the best team in the league today, as well as the best team four years from now. Spoiler alert: The Oilers ended up on both of those lists. A team built for now and the future has what it takes to overcome a crummy five-game start.

Chris Peters: I think we all expected the Toronto Maple Leafs to be better this season, but this good, this soon? There have been many comparisons between these Maple Leafs and the Chicago Blackhawks right around the time they arrived as contenders in 2008-09. That Chicago squad made it to the conference finals the year before, ultimately ending its 49-year Stanley Cup drought in 2010. If Toronto hasn't fully turned the corner this season into being a Cup contender, they Leafs are as close as you can get. While one should never read too much into early results, it's hard not to be drawn to this Toronto club. Averaging a league-best 4.67 goals per game, the Maple Leafs probably won't score at this pace all season, but they're still going to score a bunch. It has made them incredibly fun to watch. Auston Matthews is off to a tremendous start, but the Leafs are getting balanced scoring, too. Their top nine are as good as any in the league, especially with Patrick Marleau providing early contributions in his new surroundings.

As fun as Toronto is offensively, there are some holes defensively, and Frederik Andersen has had an uneven start in net. They've been a little leaky, but I think the goaltender is better than he's shown, and he's going to get some goal support. So I'm absolutely buying Toronto as one of the league's best now and well into the season.