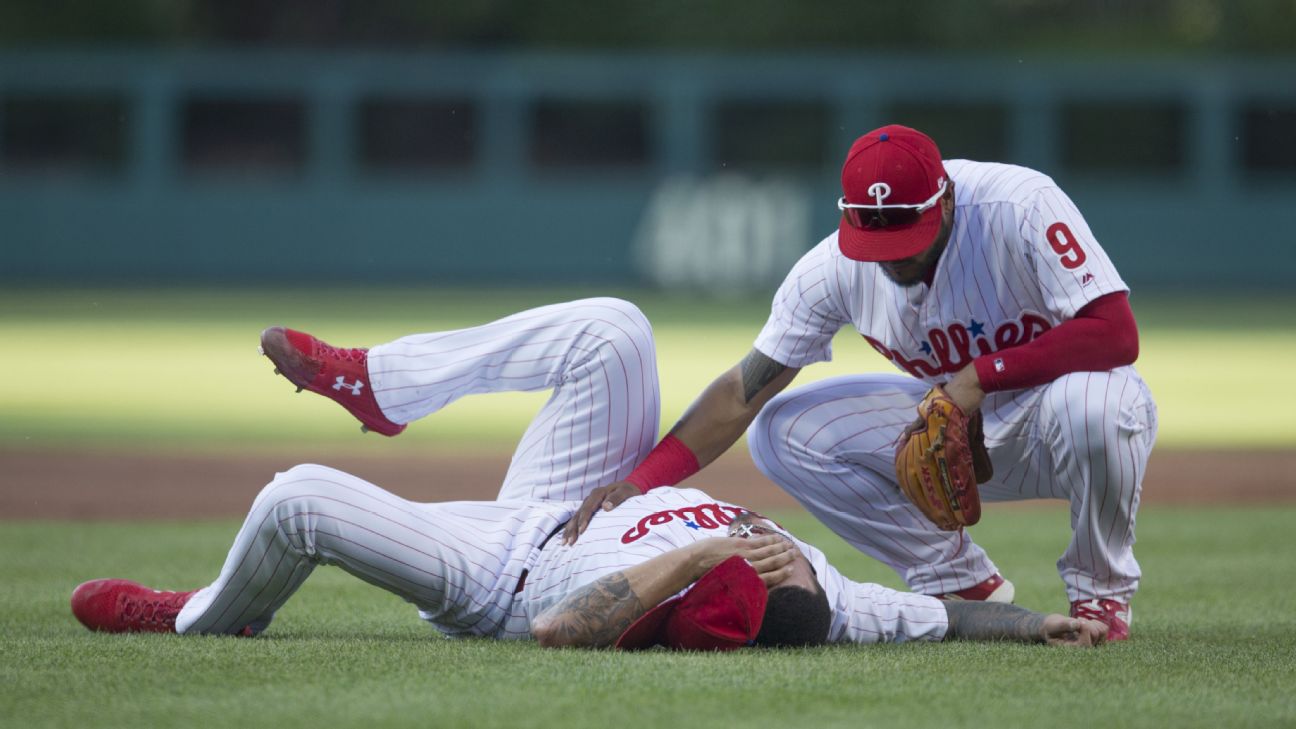 PHILADELPHIA -- If his right arm isn't healed in time for his next start, maybe Vince Velasquez can pitch with his left.

Hit on his pitching arm by a line drive, Velasquez made a dazzling throw with his left hand, and Philadelphia overcame an early injury to its starting pitcher to beat the Washington Nationals 3-2 on Saturday.

"It is well-known he is one of our best all-around athletes," Phillies manager Gabe Kapler said. "You just would never predict that."

Velasquez was struck in the forearm by Adam Eaton's liner in the second inning. He dropped his glove, hustled to retrieve the ball as it deflected toward third base and unleashed a strong toss with his opposite arm that nipped the speedy Eaton at first for the final out.

"I tried to finish the play," Velasquez said.

The Phillies pitcher actually spent his junior season in high school as a lefty-throwing center fielder due to bone chips in his pitching arm that prevented him from taking the mound.

On Friday night, Velasquez startled Phillies first baseman Carlos Santana by throwing a ball to him left-handed from the dugout in between innings.

"Kind of warmed up for that play today," Velasquez joked.

Velasquez knew he could throw left-handed. He just didn't know if he could make an accurate toss.

"I actually surprised myself throwing a strike right there," he said.

After completing the play, Velasquez dropped to the ground, writhing in pain and clutching his right arm. He was pulled from the game with a bruise, having allowed one run and three hits.

X-rays were negative, a better result than he anticipated.

"I thought something was broken," he said. "Thanks to God, nothing is severe."

Kapler said Velasquez will be further evaluated on Sunday. The pitcher said it was "up in the air" whether he would be able to take his next turn in the rotation.

Odubel Herrera homered, and Jorge Alfaro and Aaron Altherr had RBI doubles as the Phillies bounced back from a 17-7 loss. Anthony Rendon homered for the Nationals, who went deep seven times in Friday night's romp at Citizens Bank Park but managed just eight hits against six Philadelphia pitchers on Saturday.

"I thought we were going to score more than two runs after yesterday's performance," Nationals manager Dave Martinez said. "We had our chances."

Yacksel Rios kept Philadelphia in front by getting out of a jam in the eighth. After Adam Morgan allowed the first two runners to reach on a single and a walk, Rios entered and got Rendon to line out to right, Juan Soto to pop out and Mark Reynolds to ground out.

Rookie Seranthony Dominguez pitched a scoreless ninth for his seventh save in his eighth chances. Dominguez retired the first two batters before pinch hitter Daniel Murphy doubled to right, but the right-hander retired Eaton on a fly ball.

"Cool as a cucumber," Kapler said. "A special performance."

Jeremy Hellickson (2-1) returned to the mound for Washington after being sidelined since June 4 with a right hamstring strain. The veteran right-hander allowed three runs on seven hits in 4 2/3 innings with four strikeouts and two walks.