WPVI
SOUTH PHILADELPHIA (WPVI) -- As Philadelphia police search for the man who threw a beer bottle at Phillies player Ryan Howard during Saturday's game, the first baseman is speaking out about the incident.

Ryan Howard responds to fan to who threw beer bottle at him.

Investigators say a man threw the aluminum bottle onto the field as Howard was walking toward the dugout. He had just grounded out at the end of the game.

Howard was not hit.

The man who threw the bottle left on his own. The incident was reported by the Phillies' security director on Sunday afternoon, police say.

The suspect is described as a white male between 30 and 35 years old with a medium build and reddish-brown hair. He was wearing a blue Phillies hat with a red brim, a gray Phillies jersey with red writing on the front, and faded red shorts.

A photo released by investigators shows the suspect, with Ryan Howard in the background. Howard appears to be looking in the man's direction.

The photo was taken by Dennis Jabert's cousin.

"This guy threw a beer bottle right at his feet, and then immediately after jumped over the row behind him and took off," Jabert said.

Jabert tells Action News the fan had moved down in front of him from a higher seat.

"Sometimes I have good days, sometimes I have bad days, but that doesn't mean someone gets the right to throw a beer bottle at you and not face any consequences," Howard said.

Anyone with information is asked to contact Philadelphia police. Authorities say the man faces a disorderly conduct citation and will have to pay a fine.

"Ryan Howard just spoke about the beer bottle throwing incident. He said nobody deserves treatment like that and called the fan "one bad apple" that tarnishes the whole fan base. He's so appreciative of the support he's getting since the incident. He also pointed out that he's held to a higher standard, and can't exactly run into the stands and go after somebody, so he hopes the guy is caught and punished accordingly. Class act."

Police agree this one person does not represent Philadelphia or its fan.

"It doesn't represent everybody in the city, obviously. He plays a lot of years here. For one individual to do something like this, I don't think that represents the city as a whole," Stanford said.

"I think it's different when you throw a bottle at somebody. That's just unacceptable and cannot happen. Regardless of whatever happens, he deserves to be treated with respect and dignity," Barkley said. "I think we can all agree this will probably be his last year in Philly, so why can't we just treat with him respect for year."

Barkley said if it were him, he would probably had gone after the man who threw the bottle.

"Giving him a ticket or something like that, that's not punishment. Just get him in the batting cage for about 15 minutes and see what happens," Barkley said.

On Sunday, Howard was livid and told the Philadelphia Inquirer, "I've done too much in this town to have that kind of stuff."

First baseman Ryan Howard says a fan threw a beer bottle at him during Saturday's game against the Brewers at Citizen's Bank Park.

"That's dangerous for whoever threw that. We can't have that happen," said Phillies manager Pete Mackanin.

Ryan's fans and teammates are standing by him.

"I think it's very disappointing to be honest with you," said Phillies catcher Cameron Rupp. "For a guy like Ryan to have done what he's done here in his career - win an MVP, help win a World Series - I don't think it's acceptable."

"It's just the wrong thing to do, and people who do that and get caught will be arrested and prosecuted," said Kenney.

"He's one of the reasons we have what we have here, and whomever did that is pretty ignorant so I don't think he's a true Phillies fan," said Bob Gibson of Medford Lakes, New Jersey.

"It's a disgrace. It's uncalled for. It's not necessary," said Darlene Riley of Drexel Hill, Pennsylvania. "It doesn't represent Philly at all."

It's just the latest ugly Philadelphia fan incident. In April, angry spectators at a Flyers game threw wristbands onto the ice after a tribute to the late Ed Snider.

"I think most people were thinking exactly that, is this another Philadelphia incident? We can't have this happen. We want our players to want to play here and that's not going to help," Jabert said.
Related topics:
sportsaction news sportsphiladelphia philliesryan howard
Copyright © 2021 WPVI-TV. All Rights Reserved.
RELATED 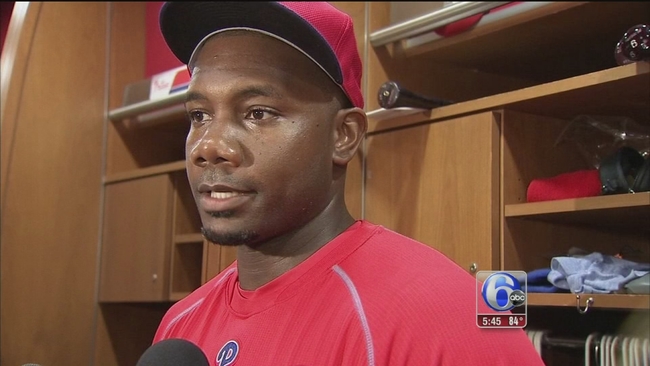