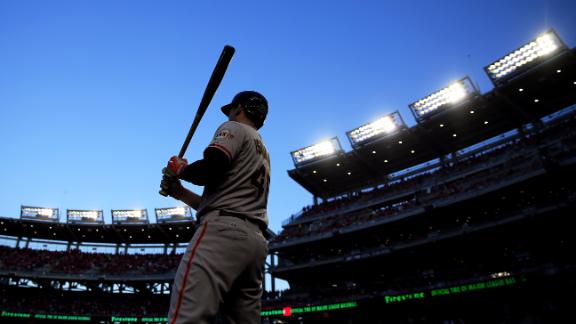 Under a new proposal by Major League Baseball, pitchers would be required to finish their warm-up pitches and be ready to make their first pitch of an inning 30 seconds before the end of all between-inning commercial breaks, sources told ESPN.com.

Similarly, hitters would have to be in the batter's box, ready to start their at-bats, 20 seconds before the end of each break.

Both proposals are designed to tighten the time between half-innings, which has grown, on average, to more than three minutes, even though regular-season commercial breaks during games that are not nationally televised are supposed to last just 2 minutes, 5 seconds.

Baseball officials believe that if play is ready to resume moments after each break ends, they could shorten games by 10 to 15 minutes. Just those efforts alone would bring the average game time to below three hours without enacting any other pace-of-game measures.

MLB and the Major League Baseball Players Association are currently discussing these and other pace-of-game measures that they hope to put into effect for the 2015 season. It has already been announced that pitch clocks will be installed in Double-A and Triple-A parks this season so that baseball officials can study both their effectiveness and how players react to playing games with a timer. MLB is not seeking to install clocks in major league stadiums for this season.

It isn't known how the union has responded to MLB's proposals designed to shorten the time between half-innings. However, players and club officials have told ESPN.com they believe a number of factors are contributing to the prolonged delays, other than pitchers and hitters not being ready when commercials end.

Team officials have expressed concerns about having enough time to stage popular between-innings entertainment such as Kiss Cam. And players have complained that TV commercials often run long, or get started late, because producers choose to show replays of the final out of the previous inning before going to commercial.

However, both sides have identified between-inning breaks as an area they believe can be shortened. So discussions are expected to continue for several weeks as the two sides seek common ground in their efforts to address time and pace of games.