Quartet inducted before crowd of more than 40,000 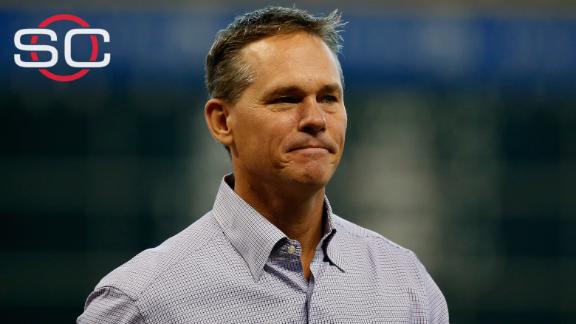 COOPERSTOWN, N.Y. -- Three pitchers who became dominant after trades and a rock-solid catcher-turned-second baseman have a new moniker -- Hall of Famer.

Randy Johnson, Pedro Martinez, John Smoltz and Craig Biggio were inducted into the Baseball Hall of Fame on Sunday and basked in the spotlight one more time with at least 40,000 fans cheering from the sun-drenched field beyond.

For Martinez, the last to speak, the moment was magical as scores in the crowd waved Dominican flags for one of their own. Martinez, who delivered part of his speech in Spanish, and former Giants great Juan Marichal, elected in 1983, are the only Hall of Famers from the Caribbean nation, although Martinez expressed confidence that more would join in the near future.

At the end of the ceremony, Martinez beckoned Marichal to the stage and they held their flag high, one last emotional gesture as the crowd roared.

"We waited 32 years for another Dominican," said Martinez, who wore a patch honoring his nation's flag on one shoulder and another honoring the United States on the other. "I hope all Dominicans remember this. I don't think the Dominican Republic will have a better image than me and Marichal on Father's Day [in the Dominican Republic] to be up there."

Playing through an era tainted by steroids and ruled by offense -- compliments of bulked-up sluggers, a smaller strike zone and smaller ballparks -- Johnson, Martinez and Smoltz proved indomitable. They combined for 735 wins, 11,113 strikeouts and nine Cy Young Awards.

Biggio, who played four positions in his 20-year career, all with the Houston Astros, was indefatigable, becoming an All-Star at second base and behind the plate.

"We changed the culture in Houston by making it a baseball city," said Biggio, who grew up on New York's Long Island. "To the Astros fans, you guys are the greatest fans in the world."

Martinez, 219-100 for his career, helped the Boston Red Sox break an 86-year-old World Series drought in 2004 and is the first Boston pitcher inducted. He grew up with five brothers and sisters in a one-room home on the outskirts of Santo Domingo and credits brother Ramon, a starter with the Dodgers during Pedro's rookie season in Los Angeles, as a key to his career.

"I have a second dad," said Martinez, who won 117 games and two Cy Youngs in seven seasons pitching in hitter-friendly Fenway Park. "Ramon, you are my second dad. I followed in his footsteps and it led me to where I am today."

Remarkably, all three pitchers didn't stick around with their first clubs very long. Drafted by Montreal, Johnson made the Expos roster in 1988 and midway through the 1989 season was traded to the Seattle Mariners.

Smoltz, signed by his hometown Detroit Tigers after being selected in the 22nd round of the 1985 amateur draft, was dealt to Atlanta for veteran Doyle Alexander in August 1987.

And the Dodgers, thinking he might be too fragile at 5-foot-10 and 170 pounds for the rigors of the game as a starter, traded Martinez to Montreal after the hard-throwing right-hander with pinpoint control had a solid rookie season in the bullpen.

On this day, that was ancient history.

Johnson, at 6-10 the tallest player elected to the Hall of Fame, gave special thanks to his parents. His father died in 1992. His mother Carol was watching from the front row.

"Thank you, Mom. You're the Hall of Famer," Johnson said.

Johnson became a 20-game winner in 1997 and won four consecutive Cy Young Awards with the Arizona Diamondbacks, leading them to the World Series championship in 2001. He finished with 303 victories in 22 seasons.

Smoltz won the 1996 Cy Young award and reached the playoffs 14 times with Atlanta. The Braves won five pennants and the 1995 World Series with Smoltz on the roster. He's the first pitcher to win more than 200 games and save at least 150 games. He is also the first player inducted with Tommy John surgery on his rsum.

Smoltz understood his debt to John.

"I'm a miracle. I'm a medical miracle," Smoltz said. "I never took one day for granted."

Smoltz also heaped praise on former manager Bobby Cox and teammates Tom Glavine and Greg Maddux, who were inducted a year ago, and delivered a message to parents of the players of tomorrow as the number of Tommy John surgeries continues to escalate.

"Understand that this is not normal to have a surgery at 14 or 15 years old," Smoltz said to warm applause. "Baseball is not a year-round sport. They're competing too hard, too early. That's why we're having these problems."

Biggio became the only player in major league history with at least 3,000 hits, 600 doubles, 400 stolen bases and 250 home runs. He paid special thanks to coach Matt Galante, who worked tirelessly over six weeks of spring training as Biggio made the transition from catcher to second base.

As he spoke, Biggio looked into the audience at Galante, a baseball lifer who was near tears before the ceremony even began.

"I'm not here without that man," Biggio said.