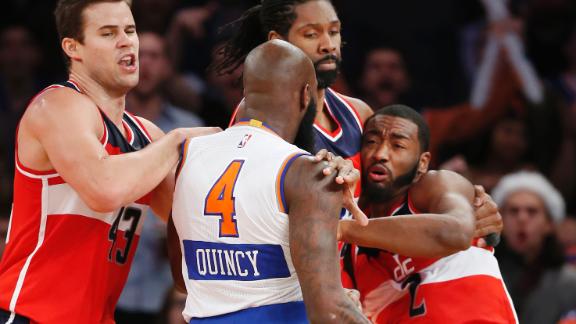 New York Knicks forward Quincy Acy has been suspended one game and Washington Wizards guard John Wall was fined $15,000 by the NBA on Friday for their roles in a Christmas Day scuffle.

The NBA said in a statement Friday that it decided to suspend Acy because his act initiated the confrontation. The league said it fined Wall because his actions escalated the incident.

Acy shoved Wall when the Wizards guard had the ball with 5:31 to play in Washington's 102-91 victory. Wall retaliated with a shove, and things escalated from there. It was unclear whether Acy threw a punch during the skirmish, but both players had to be separated by teammates.

Both Acy and Knicks coach Derek Fisher said Thursday that Acy did not throw a punch at Wall.

"I didn't throw a punch. I got up and reacted, then I just grabbed him," Acy said.

Acy received a flagrant foul 2 and was ejected from the game. Wall was issued a technical foul.

On Thursday, Acy said that he didn't expect to be suspended.

Acy explained that he was trying to foul Wall to stop the play because Knicks guard Pablo Prigioni was on the ground and his team was down a man on defense.

"It was just a foul. If somebody has a fast break and you step up and grab them, it's the same concept," Acy said.

"I think if there is intent to create that type of situation, then that's not necessarily who we want to become, but I don't think that was Quincy's intent," the coach said.

Acy has started 19 of the Knicks' 31 games at power forward in place of the injured Andrea Bargnani. With Acy unavailable, Fisher may turn to Jason Smith to start at forward against the Sacramento Kings on Saturday.