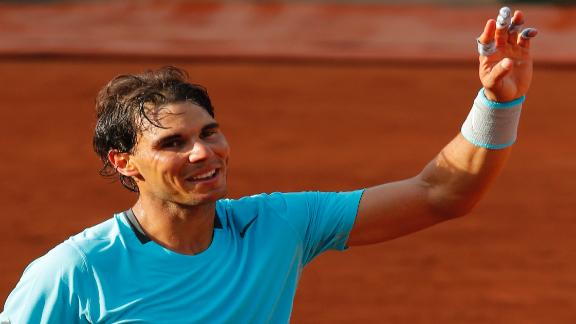 The Spaniard's only defeat at Roland Garros was in the fourth round against Robin Soderling five years ago. He was never in danger of losing this time, but was occasionally on the back foot as Thiem went for his shots throughout the match and broke the top-seeded Nadal's serve twice.

"He will have his chances to become a top star and fight for these tournaments," Nadal said. "I really fought back against his attacks."

With Nadal serving at 5-1 in the first set, Thiem saved a set point with a backhand volley at the net, then forced a break point with a forehand winner into the right corner and won the game with a replica stroke on the next point.

Nadal sealed the second set with a forehand winner down the line, but Thiem broke him again and then held for a 3-1 lead in the third.

That prompted Nadal to step up a gear and secure two consecutive breaks.

"I continued to deploy an attacking style and him move around the court," Nadal said. "I put pressure on him."

Nadal, who sealed victory on his second match point, next faces Leonardo Mayer of Argentina, who beat Russia's Teymuraz Gabashvili 6-2, 4-6, 6-4, 6-4.

"We had to fight against the wind," Ferrer said. "After four games, it was difficult and the balls were heavy."

Ferrer next faces No. 32 Andreas Seppi of Italy, while Murray faces No. 28 Philipp Kohlschreiber of Germany.