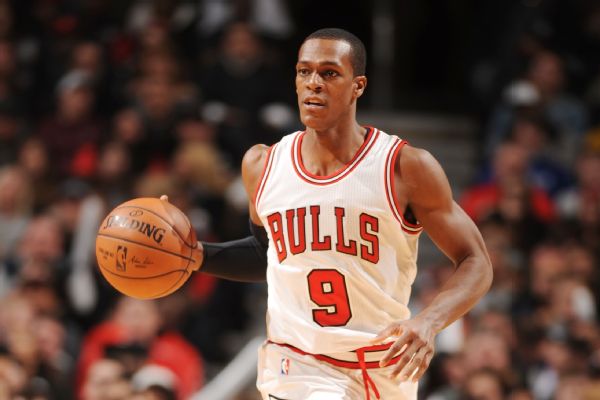 INDIANAPOLIS -- Chicago Bulls point guard Rajon Rondo was benched for the second half of Friday's 111-101 loss to the Indiana Pacers, marking the second time in less than a week that he didn't play down the stretch.

Rondo, who started the game and scored just two points in 11 minutes, said he was not surprised by Fred Hoiberg's decision.

When asked why he wasn't surprised, Rondo said it was intuition that led him to believe he wouldn't play in the final 24 minutes.

Rondo also did not play in the fourth quarter of Monday's win over the Pacers. Hoiberg decided to go with backups Michael Carter-Williams and Jerian Grant instead of Rondo on Friday.

"I thought Michael gave us really good energy in that first half and I went with him to start," Hoiberg said. "Jerian, I thought played really solid last time against these guys so I went with Jerian with the backup minutes. Just the decision that we made."

Hoiberg would not commit to Rondo starting in Saturday's game against the Milwaukee Bucks.

"We'll see," Hoiberg said. "We'll evaluate it on the way back and make a decision prior to [Saturday's] game."

Hoiberg was complimentary of the way Rondo handled the benching. Rondo was suspended for one game earlier this year after a verbal altercation with assistant coach Jim Boylen during a Dec. 3 loss to the Dallas Mavericks which included Rondo flipping Boylen with a towel on the floor.

Rondo calmly answered questions in front of his locker after the game, showing no outward frustration as to why he had been benched. He was a minus-20 and missed both shots during Friday's game.

"I'm a veteran," Rondo said. "It's not like I'm not going to continue to work hard. I'm going to stay in the gym every day, lead these guys when I can, talk to my teammates, and be professional."

Rondo said he did not get an explanation from Hoiberg as to why he was benched.

"It don't have to be a big deal. He's the coach. He and [assistant coach Jim Boylen] made some decisions. It's what it is."

Bulls swingman Jimmy Butler knows it's important for Rondo's teammates to keep talking to him while he goes through some difficulties on the floor.

"We have to," Butler said. "We're all in this together. We got to make sure his mind's still with us. We know his heart's going to be, but we don't want anybody drifting away, because something like that might happen. We just got to stay in his ear. Make sure that he's constantly still about this team because we still need him out here if we're going to win games."

When asked specifically what Rondo is struggling with right now, Hoiberg demurred. Rondo is averaging 7.5 points a game this season.

"It's something for our group," Hoiberg said. "We're just trying to find the right mix of guys that can go out and compete. And put us in the best position to win. That's all that decision was based on in that second half. ... That's just the decision that we decided to make. We'll go back and watch the film and see what direction we'll go in."

Rondo kept a team-first attitude when asked about the possibility of not starting in Saturday's game.