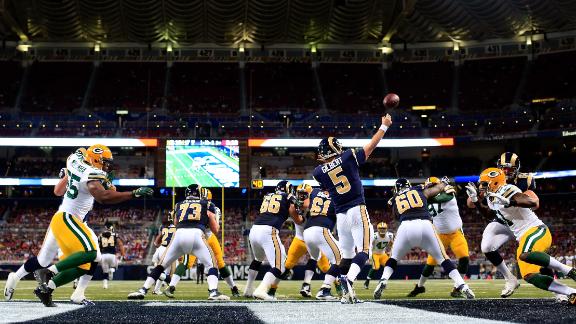 "Football is a great way to unite people," Eversgerd said. "We are a football team. As I told every one of those coaches, this is from a football team to a football team. No more, no less. There's no way that they can have a regular practice right now just a week out from the season. Why not give them the opportunity to break away from their every day and what they're dealing with to come watch us play?"

Each team took Eversgerd up on his offer and brought along the 50 to 65 kids that are a part of their respective programs. As part of the team's youth football program, the Rams regularly distribute tickets to local high schools and youth teams. A dozen local youth teams played exhibition games on the Edward Jones Dome field before and after the game against the Packers and another four or five local teams also attended.

McCluer senior running back Henry Jones said the opportunity to attend an NFL game of any kind meant a lot to him.

"It was overwhelming to see the NFL live, for real," Jones told MMQB.com. "You saw how fast they played and how they played together. I've been thinking about it ever since. I could actually see myself out there playing."

It's also not the first time the Rams have reached out to help in Ferguson. After devastating tornadoes ravaged the area in 2011 and 2013, members of the front office staff spent time helping clean up the damage.

Michael Brown, 18, was unarmed when he was fatally shot by a police officer Aug. 9, touching off a week of protests and turmoil in the St. Louis suburb of Ferguson.

"In light of everything going on in that area, it just made sense to reach out to those high schools and their head football coaches," Eversgerd said. "I talked to them directly and just said, 'Hey look, we can't imagine what you are dealing with as a football team, it's game week right now and you're trying to get ready for all of that.' We just offered tickets to them for Saturday and that's pretty much the extent of it."

"Our kids are focused on this season, but I worry about them out here, to be honest," he told MMQB.com.