Rangers GM: Bringing back Josh Hamilton was an 'easy decision' 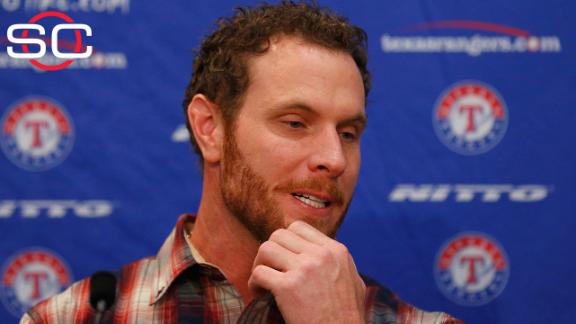 ARLINGTON, Texas -- Josh Hamilton is back with the Texas Rangers after two troubled seasons with the Los Angeles Angels filled with poor performance, injuries and an alcohol and drug relapse.

Less than halfway through a five-year, $125 million contract, Hamilton was traded Monday by the Angels to their American League West rival for a player to be named or cash. The Angels and owner Arte Moreno, wanting to be rid of Hamilton, agreed to pay most of the remaining $80 million Hamilton is owed under the contract, which runs through 2017.

"I played, and played hard when I was there," Hamilton said during a news conference. "I worked my butt off to be that guy this year going into this season for the Angels. They just didn't want that to happen for some reason."

On the 15-day disabled list while recovering right shoulder surgery on Feb. 4, Hamilton took a physical and will report Tuesday to the Rangers' spring training complex in Surprise, Arizona.

Rangers general manager Jon Daniels said the team expects Hamilton will be there for about 10 days then spend 10 to 14 days on an injury rehabilitation assignment with Triple-A Round Rock. He is on track to be activated during the second half of May.

"I'm back here. I'm back home," Hamilton said. "I'm going to give everything I've got."

Daniels called Hamilton "a player we feel can be productive and help us win games."

Hamilton was taken by Tampa Bay with the top pick in baseball's 1999 amateur draft, but his career was derailed by cocaine and alcohol addictions in the minors. He didn't play from July 2002 through 2005 because of substance abuse issues that led to multiple suspensions, and he made his major league debut with Cincinnati in 2007, when he had 19 homers and 47 RBIs in 2007.

Hamilton was dealt to Texas in December 2007. He acknowledged a relapse in early 2009 after he was photographed getting drunk in a bar in Arizona. He held a news conference in 2012 to apologize for another night of drinking.

Then he self-reported a relapse with alcohol and cocaine this past offseason. Arbitrator Roberta Golick ruled Major League Baseball could not discipline Hamilton.

"Between 2012 and 2015, a lot of my support system was kind of removed or kind of pushed away and other pieces added, not all by my doing," Hamilton said. "I've taken it back to 2012, pre-2012, as far as having my same support group that I want to have and that I get along with and I feel like is the best for me. I've put all those pieces back in place."

Texas will pay under $7 million of what is owed to Hamilton, a person familiar with the trade said. The person spoke on condition of anonymity because that was not announced.

As part of the trade, Hamilton agreed to give up some of the money he was due under the contract, the person said. Hamilton moves from California, which has a 13.3 percent top income tax rate, to Texas, which does not have an income tax.

In addition, Hamilton has the right to opt out of the contract after the 2016 season, the person said.

The trade, approved by Major League Baseball and the players' association, occurred more than two weeks after Moreno strongly indicated that Hamilton would never play again for Los Angeles.

Los Angeles had deals to send Hamilton to a pair of unspecified National League West teams that the slugger would not approve, the person said.

"When it was made aware to me that the Angels wanted to move me, my first choice was the Rangers. I've had a lot of good memories here," Hamilton said. "Looking back on it now, if I could change the past, I would. ... Probably wouldn't have gone anywhere. Probably would have stayed here."

Hamilton, who has filed for divorce in Texas, never reported to the Angels this season. He did his surgery rehab in Houston and said he "would have been playing probably a month ago" had he been allowed to finish his rehabilitation with the Angels in spring training.

"Josh, from the moment he arrived here, there's been turbulence," Angels general manager Jerry Dipoto said during a telephone conference call. "If I could put my finger on why Josh had a tough time here, we may have been able to help him solve those issues."

Moreno seemed to sour on his high-priced signee when it was revealed in February that Hamilton had a relapse into his drug addiction while rehabilitating from shoulder surgery. When the rumor circulated that the Angels were going to move him, Hamilton said the Rangers were his first choice.

"I'm really happy to have him,'' said Elvis Andrus, one of the few Rangers remaining that can call Hamilton a former teammate. "He's a guy that has showed he can carry a team.

"Nobody in this clubhouse is going to judge him," Andrus added. "Nobody is perfect. He knows we have his back with whatever happens. We know the kind of person he is."

"All 25 players are different,'' the Rangers manager said. "Each one has his own things to deal with on a daily basis. He's one of 25 in the clubhouse.

"My experience is when players have something to motivate and drive them, they perform better and stay focused.''

Seeking its first title since 2002, Los Angeles went 78-84 in Hamilton's first season with the Angels then finished a big league-best 98-64 last year only to falter in the playoffs.

In 240 games the past two seasons in Los Angeles, Hamilton had 31 homers and 123 RBIs. He was limited to 89 games because of injuries last year, which ended with him going hitless in 13 at-bats as the Angels were swept in three games by Kansas City in the AL Division Series.

Information from ESPN.com's Randy Jennings and The Associated Press was used in this report.

Hamilton on returning to Rangers
Josh Hamilton discusses his return to the Texas Rangers after being traded from the Los Angeles Angels.

Angels deal Hamilton to Rangers
Jerry Crasnick discusses the trade that sends Angels OF Josh Hamilton back to the Rangers.