Reds' Bryan Price sorry for vulgarities, but stands behind message 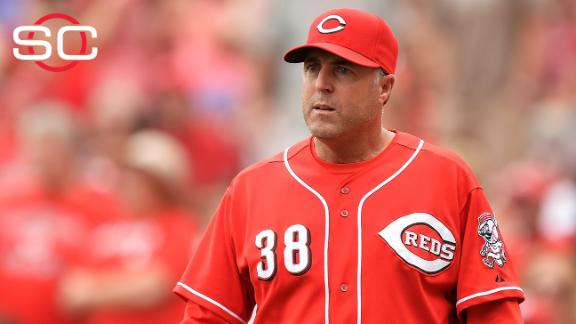 Cincinnati Redsmanager Bryan Price, after using the F-word 77 times and 10 more variants of other vulgarities during a rant to media members, apologized Tuesday for "inappropriate language."


"In my pregame conversation with reporters yesterday, I used wholly inappropriate language to describe the media coverage of our team," Price said in a message posted on the Reds' official Twitter account. "While I stand by the content of my message, I am sorry for the choice of words."

Price,in a five-and-a-half minute rant focused on recently published roster information and how it -- in his view -- could be beneficial to opponents, lashed out in front of a group of 10 media members Monday.


"I don't get it. It's, you know, look, I don't need you guys to be fans of the Reds," Price said, according to a transcript of the media session published by the Cincinnati Enquirer. "I just need to know if there's something we want to keep here, it stays here.


"We don't need to know thatTucker Barnhart's in the f---ing airport when we haven't spoken toKyle Skipworth,"Price said, referring to Reds catchers, one of whom returned to the team last week while the other was subsequently demoted to the minors. "I think we owe that f---ing kid the right to be called and told that he's going to be sent down as opposed to reading that Tucker Barnhart is on his way from Louisville."


Price also was reacting over a report that All-Star catcher Devin Mesoraco, out last week with a left hip injury, was unavailable Sunday as a pinch hitter in the last of a three-game series against the Cardinals. Mesoraco reportedly had been on the plane Friday withBarnhart.


Price's blowup was out of character. The second-year manager is known for being gracious and respectful with reporters, and rarely swears in their presence.


Unlike the NFL, where coaches try to keep injuries more secret, Major League Baseball managers routinely tell reporters which players are available for a game. They'll explain that a starter is out of the lineup because of a minor injury, but is available to pinch-hit. Or that a reliever is unavailable because he has pitched several days in a row.


Price was elevated from pitching coach to manager when the Reds fired Dusty Baker after the 2013 season for failing to get the team deeper into the playoffs. The Reds won only 86 games last season and finished ahead of only the Cubs in the NL Central.


They won their first four games this season -- their best start in four years -- then dropped seven of eight. During the slump, Price -- who was ejected twice last season -- got thrown out of a game for causing a delay by refusing to leave the field.


There's added pressure on the Reds to do well this season. They host the All-Star Game in July and want the team to be doing well when Cincinnati gets the national attention.


Price is in the second year of a three-year deal.