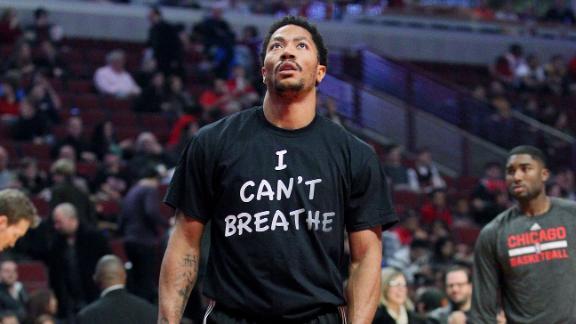 DETROIT - Reggie Bush planned to do this last week and in his first game back with the Detroit Lions, he made as much of a statement before the game as he did during the Lions' 34-17 win over Tampa Bay on Sunday.

In warmups before the game, Bush wore a shirt with "I Can't Breathe" written in black marker against a blue background signifying the last words of Eric Garner, the New York man who died while being placed in a chokehold as he was being arrested.

Earlier this week, a grand jury said it would not indict the officer shown on tape choking Garner.

"I just wanted to wear that on my shirt."

This hits even closer to Bush because he said his mother has been a police officer for almost 20 years. Bush said he hasn't spoken with his mother in depth about the situations in New York or Ferguson, Missouri or his own protest, but that he believes she will support him with whatever he says.

Bush wore the shirt a day after Chicago Bulls star Derrick Rose wore an "I Can't Breathe" T-shirt in pregame warm-ups prior to his team's game Saturday night against the Golden State Warriors.

"I saw a picture of it, yeah," Bush said. "I thought that was really cool. It speaks volumes, you know. We all have, from an athlete standpoint, we all have a voice and I feel we can all be role models and lead by example."

"You're probably asking the wrong guy that question," Caldwell said. "I grew up in the 60s, where everybody was socially conscious. I believe in it. I would be a hypocrite if I stood up here and told you any differently but more than likely, some of those protests that Dr. King and some of the others took part in, non-violent protests, is the reason why I am standing here in front of you today.

"So absolutely, no question about it. I don't mind it."

He wasn't the only NFL player to display the message Sunday. Cleveland Browns cornerback Johnson Bademosi warmed up in a shirt with the message and St. Louis Rams offensive lineman Davin Joseph wore the message on his cleats.

This has been a continuing trend of protest for Bush, who took to Twitter last month after Ferguson police officer Darren Wilson was not indicted by a grand jury in the killing of Michael Brown, which has sparked months-long protests outside of St. Louis.

Bush also explained his views on the Ferguson situation to ESPN.com last month.

"Just something seemed flawed about the system and about the way that situation was handled," Bush said. "I don't know all the facts of what happened during when Michael Brown was killed, but I just know that a young man lost his life. Was shot how many times? Six? Ten times? Ten times. That's a little excessive.

"So it goes back to the way the situation was handled, from there to the grand jury. It just seems like, it just turned my stomach. I felt embarrassed because of how it was handled and people rioting -- obviously that's not the answer."

Rose Wears 'I Can't Breathe' Shirt In Protest
Joakim Noah comments on teammate Derrick Rose's decision to wear a T-shirt reading "I Can't Breathe" in reference to Eric Garner, the man who died after a New York police officer placed him in a chokehold while arresting him in July.

Protesting And Sports Have Always Mixed
Those who insist sports and protests such as Michael Brown and Eric Garner should not mix, ignore that they have always been mixed. Keith Olbermann explains.