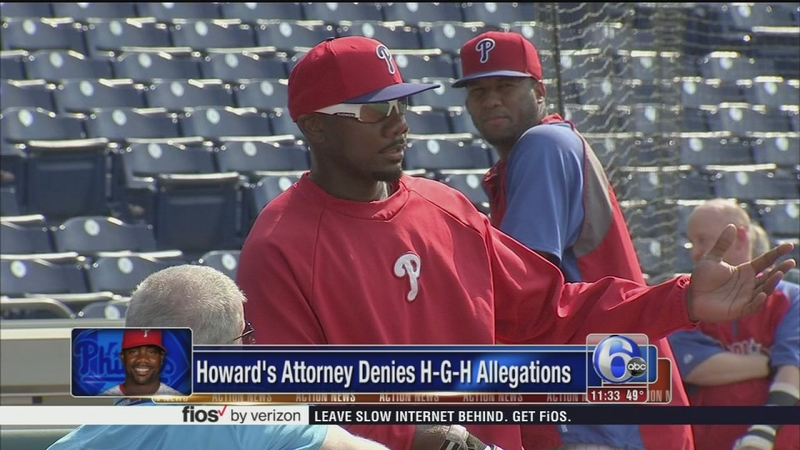 Philadelphia Phillies first baseman Ryan Howard has been listed in a new Al Jazeera undercover probe as one of several prominent professional athletes who were supplied illegal performance-enhancing drugs from an Indiana-based anti-aging clinic.

Al Jazeera's documentary, that was posted online early Sunday morning and aired on TV later in the day, reports Manning was given a supply of human growth hormone in 2011 while he was recovering from surgery that year from a man identified as a pharmacist then employed at the anti-aging Guyer Institute in Indianapolis.

The report cites a man named Charlie Sly, who allegedly spoke to an undercover reporter working for the network.

Action News has obtained the following statement from William Burck of Quinn Emanuel, the attorney for both Howard and Zimmerman:

It's inexcusable and irresponsible that Al Jazeera would provide a platform and broadcast outright lies about Mr. Howard and Mr. Zimmerman. The extraordinarily reckless claims made against our clients in this report are completely false and rely on a source who has already recanted his claims. We will go to court to hold Al Jazeera and other responsible parties accountable for smearing our clients' good names.

Howard was among those who "emphatically denied" the allegation of taking any PEDs to Al Jazeera, the network says in the video.

The Philadelphia Phillies released the following statement on Sunday evening:

Ryan Howard has vigorously denied the allegations contained in tonight's airing of Al Jazeera's report titled 'The Dark Side.' Ryan has spent his whole career with the Phillies and, during that entire time, has been an extremely well respected member of our team and an outstanding contributor to our community. We will fully cooperate with any investigation conducted by Major League Baseball and will refer all further questions to them concerning the Al Jazeera report.

MLB tells 6abc they plan to conduct a full investigation into the report.

"It's defamation and it really ticks me off." Peyton Manning disgusted with report linking him to HGH in 2011: https://t.co/990i4EJ2hB

"It stings me, whoever this guy is, to insinuate that I cut corners, I broke NFL rules in order to get healthy. It's a joke. It's a freaking joke," Manning said, reiterating that he did not use HGH.

Sly told ESPN's Chris Mortensen that he isn't a pharmacist and wasn't at the Guyer Institute in 2011, as Al Jazeera claimed. State licensing records indicate that a Charles David Sly was licensed as a pharmacy intern in Indiana from April 2010 to May 2013. His license expired May 1, 2013.

Sly also said he recanted his story to Al Jazeera when he realized that it had used information he had "made up" to British hurdler Liam Collins, the undercover reporter who Sly said was trying to get into the supplementation business.

"When I was there, I had never seen the Mannings ever. They were not even living there at that time," Sly said. "Someone who worked there said they had been there before. That was the extent of any knowledge I had. I feel badly. I never saw any files. This is just amazing that it reached this point."

Al Jazeera's report, titled "The Dark Side," contends that steroids and other drugs were shipped to the home address of Manning in 2011 in the name of his wife, Ashley, so that the quarterback's name was never attached to the shipments. Sly, now based in Austin, Texas, also said in the undercover video that Manning and his wife went to the clinic after its normal business hours for intravenous treatments.

"The allegation that I would do something like that is complete garbage and is totally made up," Manning told Mortensen on Saturday night. "It never happened. Never. I really can't believe somebody would put something like this on the air. Whoever said this is making stuff up."

Manning went on to say: "Yes, I have been a patient under Dr. Guyer. I have had nutrient therapy, oxygen therapy and other treatments that are holistic in nature, but never HGH. My wife has never provided any medication for me to take. Ashley and I never attended the clinic together after hours. There were times when I went in the morning and there were times when I went after practice so this thing about 'after hours' is so misleading because it may have been 5:15 p.m. because their office closed at 5."

Dr. Dale Guyer released a statement Sunday, emphasizing that Sly "was never an employee of the Guyer Institute."

"I have no reason to believe these allegations are based in fact or have any truth," Guyer said. "In fact, I can say with absolute certainty they are not. I find it extremely disturbing that the source of Al Jazeera's story, a former unpaid intern named Charles Sly, would violate the privacy of Mrs. Manning's medical records and be so callous and destructive as to purposely fabricate and spread stories that are simply not true.

"I would emphasize that Mr. Sly was never an employee of the Guyer Institute and his brief three-month internship occurred in 2013 during which time Peyton was not even being treated or present in the office. I think it is obvious that Mr. Sly has fabricated this whole thing for reasons I cannot fathom. I am proud to have treated Peyton and helped him through his rehabilitation. Mr. Manning is one of the most honorable and upstanding individuals I have had the pleasure of knowing."

The Broncos also defended Manning in a statement Sunday, saying, "Peyton does things the right way."

"Knowing Peyton Manning and everything he stands for, the Denver Broncos support him 100 percent," the team said. "These are false claims made to Al Jazeera, and we don't believe the report.

"Peyton is rightfully outraged by the allegations, which he emphatically denied to our organization and which have been publicly renounced by the source who initially provided them."

The Colts also issued a statement defending Manning, who spent 14 seasons in Indianapolis before signing with Denver in 2012.

"We've been made aware of the recent Al Jazeera report concerning Peyton Manning and find it utterly ridiculous," the Colts' statement said. "We are thoroughly familiar with Peyton's tireless work habits, his medical history, and, most importantly, his integrity.

"Peyton played the game in Indianapolis for 14 years the right way. He never took any shortcuts and it would be absurd to suggest he would have taken prohibited performance-enhancing drugs. We also note that the 'source' of this allegation has since recanted his story. The entire Indianapolis Colts organization and the Irsay family hope this crude effort to besmirch Peyton's reputation will not be permitted to tarnish the legacy of a great Colt."

In the documentary, Sly also mentioned boxer Mike Tyson as another athlete who received HGH shipments from him while he worked at the Guyer Institute.

Sly said he was "testing" Al Jazeera's undercover reporter by dropping "names like Peyton Manning, Derek Jeter, Ryan Howard and James Harrison." He said none were clients. While Manning, Howard and Harrison were mentioned in Al Jazeera's HGH investigation, Jeter was not.

"When I realized Al Jazeera was using a secret taping and Collins as a so-called investigative reporter, I was baffled," Sly said. "I cannot believe that can happen. That's why I recanted the story. It wasn't true, and I was trying to pull one over on Collins to see if he had any idea of what he was talking about.

"I was trying to determine whether this guy [Collins] was legitimate or just trying to steal some knowledge about the business."

"The allegation reported by Al Jazeera naming Peyton is absolutely false and it recounts behavior and events that never occurred," Tom Condon said in the release. "The implications suggested by Al Jazeera are outrageous and baseless. Their source has already retracted his statements, as well as advised Al Jazeera those statements were meritless.

"Any further reporting of this matter is a retelling of falsehoods and fiction and complicity in the lack of journalistic ethics demonstrated by Al Jazeera."

The report links several other athletes to HGH and other drugs, including Green Bay Packers linebacker Mike Neal, who allegedly introduced teammates Julius Peppers and others to Sly, and mentions Pittsburgh Steelers linebacker James Harrison, Peppers and Neal as athletes who received shipments of a new performance-enhancing drug called Delta-2 from him.

The report goes on to say that Sly furnished Clay Matthews with painkillers and that Howard, Zimmerman and Tyson received drugs from Sly.

Harrison, Zimmerman and Howard all denied the allegations to the network. Neal, Peppers and Tyson didn't respond to requests for comment, Al Jazeera said.

William Burck, the attorney for both Harrison and Zimmerman, called the report "inexcusable and irresponsible" and said Al Jazeera had broadcast "outright lies."

"The extraordinarily reckless claims made against our clients in this report are completely false and rely on a source who has already recanted his claims," Burck said. "We will go to court to hold Al Jazeera and other responsible parties accountable for smearing our clients' good names."

The NFL and players' union added HGH testing to the collective bargaining agreement signed in 2011, but the sides didn't agree to testing terms until 2014. Nobody has tested positive, which would trigger a four-game suspension.