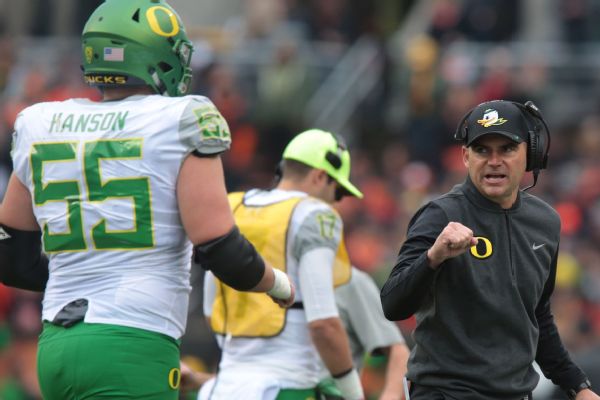 EUGENE, Ore. --Oregonathletic officials are preparing for a coaching search even though they have not yet fired Mark Helfrich, USA Today Sports has reported.

As of 1 a.m. ET Sunday, a decision on Helfrich's future with the program had not been reached, a source told ESPN's Brett McMurphy. Helfrich is scheduled to hold his end-of-season news conference on Sunday afternoon, with the team banquet to follow.

After Oregon lost to rival Oregon State 34-24 earlier Saturday to complete their regular season at 4-8, Helfrich told reporters he intended to head out on the recruiting trail Sunday. The defeat capped the Ducks' worst season since a 3-8 finish in 1991.

Helfrich said after the game there were no plans to speak with athletic director Rob Mullens. Asked if he believed his job was safe, Helfrich said he doesn't "make that determination."

"Nobody's job is safe in college football," he said. "That's the nature of the beast. I'm very proud of how our staff handled this year and how our players handled this year, but that's for someone else to decide."

Speculation surrounding Helfrich's job security has been swirling over the past month, but Mullens has not yet come out to voice complete support for Helfrich.

Asked to evaluate his coaching performance this season, Helfrich said, "We didn't win enough games. That's blunt. ... We have to own that part of it."

Helfrich is 37-16 in his four years as head coach, but half of those losses came this season. He is only two years removed from a national title game appearance and a Heisman win by former Ducks quarterback Marcus Mariota, but the 4-8 season came on the heels of two major changes he made in hiring offensive coordinator Matt Lubick and defensive coordinator Brady Hoke after demoting his previous defensive coordinator, Don Pellum.

Off-the-field issues have continued to mount for Oregon. Helfrich recently dismissed defensive lineman Austin Maloata after a DUI arrest. Oregon had previously given indefinite suspensions to defensive linemen Eddie Heard and Torrodney Prevot. Last week, wide receiver Darren Carrington was involved in an off-field incident in which he was accused of assaulting a former student after the Ducks' win over Arizona State.

Through the speculation, Oregon players have voiced support for Helfrich.