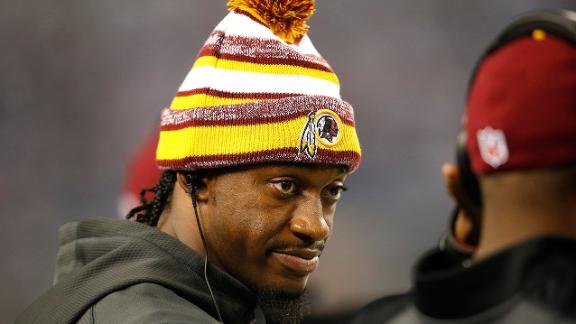 An Instagram video of Robert Griffin III singing along to Michael Jackson turned into an exchange on his image and how he uses social media, with the Redskins quarterback's comments serving as a defense not only to the one reader but also, likely, to numerous other critics.

After singing along to the 1982 hit "Billie Jean," Griffin engaged in a back-and-forth with a fan that never turned nasty but did amplify views on Griffin's use of social media.

A commenter on the Instagram page, @cperezrn, triggered the debate.

"This is why you will be cut after next year in Washington," the commenter wrote. "Why you weren't even mentioned as the future. You are a 'QB'. Act like one."

The commenter then told another user that Griffin "cares more about his brand, social media than working in his craft."

And off went the back-and-forth.

Griffin responded by saying, "If giving back to the community and training for football at the same time is frowned upon.....then what would you say I do Sir? Not give back or Train? Honest Question." And then, "Oh wait...and should I not enjoy a classic song with others who Love MJ? I'm just asking for your wisdom here."

Griffin's image has taken a pounding in the past two seasons, with numerous stories questioning his leadership skills and his teammates' and coaches' thoughts on him and his future. There has been a prevailing notion among some fans that Griffin should stop using any social media or performing in any commercials until he starts winning.

Griffin said on the Instagram page to another user, "Players put too much time into our profession to be told posting on social media 2 or 3 times a day is a sign that you don't focus on your craft."

The user told Griffin to act like the leader of the team, to which Griffin replied, "No need to act like a leader, just gonna be one as always. The case you tried to make isn't supported by anything I have done. Fun loving, motivation & football based commercials? Motivation and family related social media post?"

And this: "Community events & gear going towards helping the community?"

The final exchange by the user, who described himself as a military man, referenced the letter the Redskins sent to premium season-ticket holders last week about the 2015 season. They mentioned four players as the team's nucleus -- linebacker Ryan Kerrigan, running back Alfred Morris, receiver DeSean Jackson and left tackle Trent Williams. It was a symbolic omission for a guy once viewed as the franchise savior.

Griffin ended the exchange with this: "Military families have class, dignity & loyalty. I will maintain mine. You have not shown any of those. I will keep it that way and let you go right off my page God Bless."