Richard Sherman: 'I need the ball' 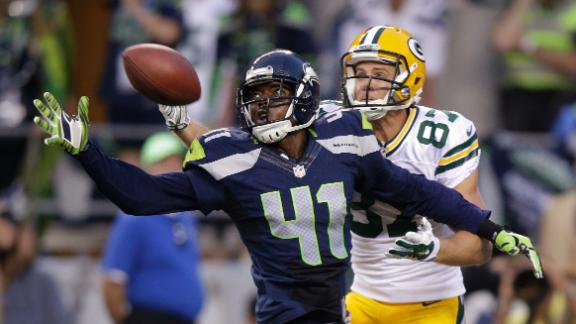 RENTON, Wash. -- Seattle Seahawks cornerback Richard Sherman had no idea that people can place a bet this week on how many times San Diego Chargers quarterbackPhilip Riverswill throw the ball his way.

"Really, you can do that?" Sherman asked. "Is that legal?"

Well, yes, for an NFL prop bet. The offshore sports book Bovada.lv has put out an over/under line on how many times Rivers will test Sherman. It's three.

Sherman is hoping the over wins out. He's still upset about Green Bay Packers quarterback Aaron Rodgers avoiding him last week in the Seahawks' 36-16 victory, not once throwing a pass in Sherman's direction.

Sherman was asked if he sees it as a sign of respect.

"It's still taking me a while to understand that," Sherman said. "You want to be part of the game and make your plays to help your team win. If that means not doing anything, then that's what I have to do.

"I'm flattered, but it doesn't make much sense to me. As a ballplayer, if you don't get the ball, you don't have as much impact. I need the ball."

Sherman said he's trying to put it behind him.

"It's in the past now," Sherman said. "We're just preparing for San Diego. Within the scheme of the defense, my opportunities will come. There are many methods to my madness. I just have to dig in a little bit."

But it won't be flip-flopping sides with cornerback Byron Maxwell.

"We don't do that," Sherman said. "That's a form of disrespect to the other corner. We have great players everywhere. That's (a) slap in the face."