Rob Gronkowski: Flag-free final play in end zone 'is what it is' 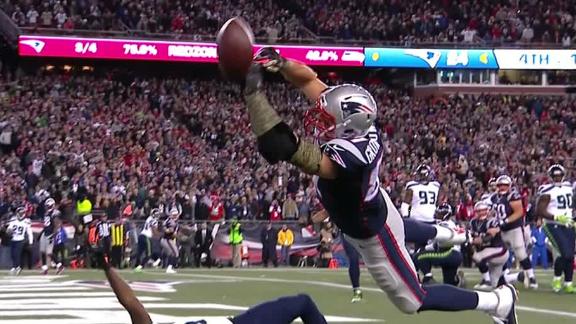 Tom Bradywanted a call from officials that would have extended the game. So did Rob Gronkowski, who was seen insisting he was held by Seattle Seahawks safety Kam Chancellor.

But a pass-interference penalty wasn't called on Chancellor -- on fourth-and-goal from the 1 on the Patriots' final offensive play -- handing New England its second loss of the season and creating more controversy over NFL officials' judgment calls.

"The play is what it is. You can't really change it."

Gronkowski said he hadn't been trying to initiate contact but that "it just happened."

"He was playing off me a little bit, pretty far, farther than usual," Gronkowski said. "You usually don't see that, and it was a fake, so I had to go up to him and make a little move."

The Seahawks said they had practiced defending the play in the final sequence of the last practice before the game.

"I was on Marcus Lucas, and he did the same exact route and we both fell and hit the ground just like that," Chancellor said of the Seahawks tight end. "But I actually got my hand on the ball in that one. But he didn't push me. So, you know, just a little different."

Chancellor had returned Sunday after being sidelined for a month with an injured groin.

"Gronk's a great competitor, man," said Chancellor about his fellow four-time Pro Bowler. "And with us two on the field, why not end it like that, you know what I'm saying? Give both of us a chance. Give him a chance and let me go out and cover him."

It certainly won't make up for their Super Bowl loss two seasons ago, but the Seahawks' goal-line stand lifted them to a31-24 victory as New England failed four times from inside the 2 in the dying moments.

Gronkowski, who finished with three catches for 56 yards, reiterated he has often faced notable challenges with officials on such plays.

"I've had problems in the past with that, last year and a couple times this year," Gronkowski said. "But I'm not here to make excuses and say that was a [penalty]. I just want to -- we just lost a game -- I want to give credit to the Seahawks. They played a good game. It was a well-fought 60-minute game on both sides of the ball, but I mean, I'm not trying to get into that discussion right now."

Brady said he didn't see the end of the play, which harkened back to how the Seahawks lost Super Bowl XLIX whenMalcolm Butler'sinterception at the goal line sealed the title for the Patriots.

"I mean, there was a lot of -- there's always a lot of contact with that team," Brady said. "Sometimes you get the call; sometimes you don't. So certainly, it looks like it came down to one play, but there were a lot of plays in this game that we could have done a better job of.

"They're a good team. We knew that going in, and we have to play better than the way we played. We were just too careless with the ball. They weren't. The turnovers were a big factor. We had our chances. We just didn't make enough plays."

"It was a really competitive play," Belichick said. "I thought the game was well-officiated. They did a good job of letting the players play. I mean they called some things they had to call. I focus really on our team, what we can do. That's what we need to do."

Seahawks coach Pete Carroll said "there ain't nothing like it in football," referring to the goal-line stand.

"It's one of the great challenges that a team and a defense gets," Carroll said. "And our guys just came through and hung in there and just fought for every inch and let us walk away with the win."

Information from ESPN staff writer Mike Reiss and The Associated Press was used in this report.

Goal-line stands are all about wanting to be legendary
Ryan Clark explains the mindset from a defensive perspective in a goal-line stand like the one the Seahawks executed to hold off the Patriots for a victory on Sunday night.
Related topics:
sportsespnnflrob gronkowskinew england patriotsseattle seahawkskam chancellortom bradygoal line play
Copyright © 2022 ESPN Internet Ventures. All rights reserved.
TOP STORIES
Building owner charged in fire that led to firefighter's death
Witness: Trump grabbed steering wheel, demanded to go to Capitol
Carry permits expected to skyrocket in NJ after SCOTUS ruling
Epstein associate Ghislaine Maxwell sentenced to 20 years in prison
Bryce Harper set for thumb surgery, Phils hope he plays this year
Black bear dies after getting stuck inside hot car in Tennessee
$6 billion will be infused into Navy Yard to make it a 'destination'
Show More
Grandmother of Uvalde school shooter released from hospital
Photos released of vehicle sought in Bridgeton hit-and-run
The official teaser trailer for 'Hocus Pocus 2' has arrived: Watch now
Chestnut Hill neighbors in a pickle over pickleball courts
Woman critically injured after being hit by Philly police vehicle
More TOP STORIES News