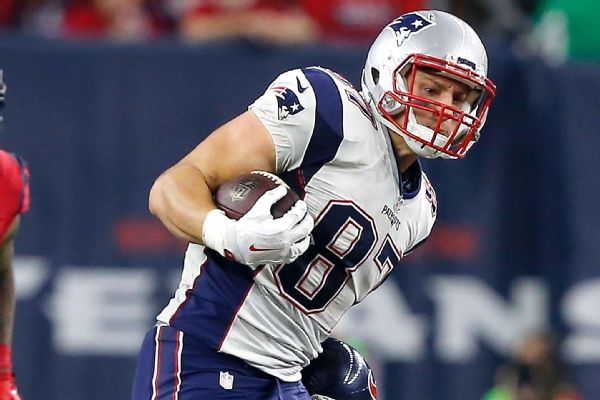 ORCHARD PARK, N.Y. -- New England Patriots tight end Rob Gronkowski set the franchise record for touchdowns as a receiver on Sunday, catching a 53-yard scoring pass in the second quarter against the Buffalo Bills to give him 69 for his career.

Gronkowski, in his seventh NFL season, broke a tie with wide receiver Stanley Morgan, who played for the Patriots from 1977 to 1989.

Gronkowski finished Sunday's 41-25 Patriots victory over the Bills with five receptions for 109 yards and the touchdown.

Last Sunday, after tying the record in a victory over the Pittsburgh Steelers, Gronkowski said he looked forward to attaining the record. Four days later, he downplayed the possibility, saying, "That's the last thing I'm thinking about right now."

Gronkowski has 68 career receiving touchdowns and one rushing touchdown. Of the 68 touchdown passes, 67 have come from quarterback Tom Brady. (Jimmy Garoppolo threw the other in 2014.)

The next-closest touchdown connection in team history is Drew Bledsoe to tight end Ben Coates; they had 45.

The record-breaking touchdown against the Bills, on a play up the right seam, gave the Patriots a 21-10 lead.