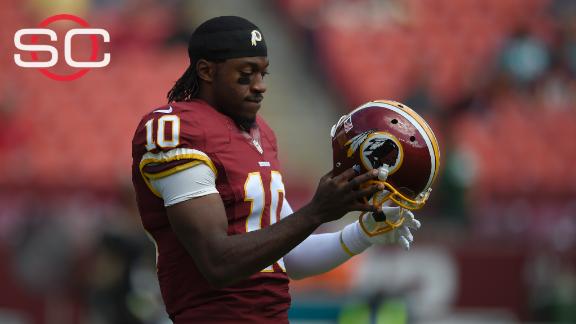 Washington Redskins president Bruce Allen finally said publicly what has been a poorly kept secret for some time: Quarterback Robert Griffin IIIwill play elsewhere next season. And, Allen said, he'll have his choice of teams to further his NFL career.

It's not surprising that the Redskins would be moving on from Griffin, but it is the first time a team official has said he won't be playing for Washington next season. Allen told the Dan Sileo Show on The Mighty 1090 in San Diego that Griffin would not be on the roster next season. Last month, general manager Scot McCloughan left open the remote possibility that Griffin could return, though even then team officials privately said the relationship was over.

"I see Robert getting an opportunity with another team," Allen said. "We've heard from some teams that are interested. I think he's going to have a choice of a couple teams that will let him excel in the future."

The Redskins have been able to release Griffin since Feb. 8, the day after the Super Bowl. They can release him any time until 4 p.m. March 9, when the new league year begins. If Griffin were still on the roster at that point, his 2016 option would kick in and he would count $16.155 million against the salary cap.

One source considered any trade a longshot, but the Redskins are holding on to him for now, just in case.

Griffin, the 2012 NFL Offensive Rookie of the Year, did not take one snap last season. He was only active for one game, serving as the No. 3 quarterback after losing his starting job to Kirk Cousins.

"From the very beginning, Robert has handled himself like a professional," Allen said. "When we drafted him all the way through, he's been a good teammate and a good guy. I know some people on the outside always like to be critical, but his teammates like him, his coaches like him and he does have some special talents and we wish him well."

The Redskins are trying to work out a long-term deal with Cousins, but the sides have reached an impasse. Washington can always use the franchise tag to keep Cousins around for at least another year; the deadline for using the tag is March 1.

"The good thing is, Kirk said he wants to be a Redskin and we want him to be a Redskin," Allen said. "So these things usually work themselves out about this time or in the next few weeks. So we're pretty confident of that."