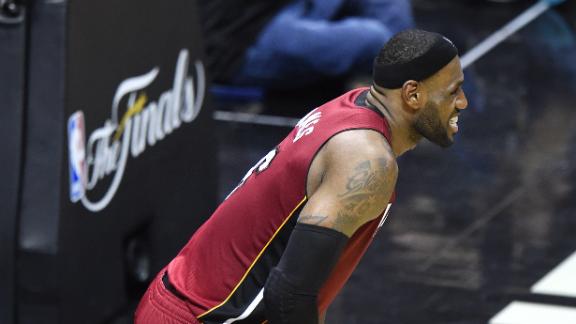 And Thorn, speaking Thursday night after Game 1 of the NBA Finals in an interview with ESPN's Michael Wilbon, said the heat that precipitated LeBron James' leg cramps and eventual exit in the fourth quarter shouldn't be an excuse for either team.

"Things happen in live sporting events, sometimes things happen," Thorn said after the Spurs' 110-95 win over the Heat. "In this case the air conditioner went out. It was the same for both teams. Both teams are playing under the same conditions."

AT&T Center officials in San Antonio said an electrical issue caused the problem that led the air-conditioning systems to fail. The onset of the heat could be felt in the first quarter before the arena temperature eventually reached 90 degrees.

"LeBron had to leave the game in the fourth quarter with the game still in the balance," Thorn said. "He's such a great player that obviously when a player of that ilk leaves the game, it certainly affects the game.

"But again, both teams were playing under the same conditions. There was nothing wrong with the floor. We've played in these conditions before."

Thorn said the game officials ultimately were responsible for determining whether conditions had deteriorated to the point that the game should be halted.

"If the referees felt the court was unsafe, they would have come to midcourt and talked to me about it," Thorn said. "You didn't see people slipping."

Thorn said neither team complained "at all" during the game.

"It's unfortunate, obviously, that it happened," Thorn said. "But the court was safe, and therefore we continued the game."

The series resumes for Game 2 in San Antonio on Sunday night, as the NBA Finals allow for an extra day off between games.

Thorn said there wouldn't be a problem going forward.

"They expect everything to be perfect come Sunday," Thorn said. "And that's what we expect, too." 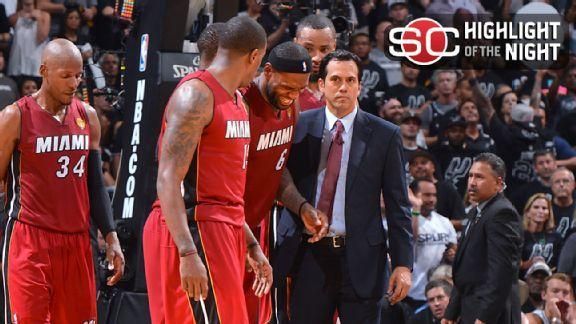 Spurs Handle The Heat In Game 1
Highlight Of The Night: LeBron James left the game in the fourth quarter due to cramping, and the Spurs went on a 31-9 run to defeat the Heat 110-95 in Game 1.