Roddy White: 'Say we messed up' 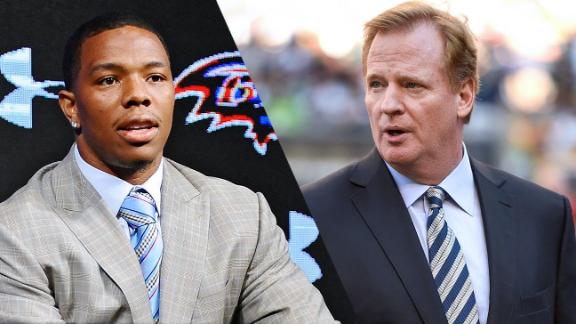 Reaction was swift, widespread and unsparingly blunt Wednesday in the wake of news that called into question commissioner Roger Goodell's account of how the league learned about the Ray Rice elevator video, with current and former NFL players, an owner, a league sponsor and a leading U.S. legislator weighing in.

News surfaced Wednesday afternoon that a law enforcement official hadtold The Associated Pressthat he sent a video of Rice punching his then-fiance to an NFL executive five months ago, while league executives, including Goodell, maintained they didn't see the violent images until this week. The NFL said Wednesday night that former FBI director Robert S. Mueller III will be conducting an independent investigation into the matter.

Atlanta Falcons receiver Roddy White was among a small group of current players who took to Twitter, calling for Goodell to issue a mea culpa but saying the commissioner was handcuffed by pride. The post was later deleted.

"Rodger should just come out and say we messed up and drop the ball on this one," White tweeted. "But he won't to much pride and it's a lot of that in the nfl."

Former Pro Bowl linebacker and recent retiree James Harrison, infamous for racking up a small mountain of fines during his career, likened the growing scandal to a rabbit hunt.

@nflcommish ain't no fun when the rabbit got the gun huh?

- James Harrison (@jharrison9292) September 10, 2014Former longtimePhiladelphia Eaglesrunning back Brian Westbrook also was among the bevy of current and former players to voice frustration.

Westbrook, who retired after the 2010 season, called for the NFL to judge Goodell with the same set of strictures as it does the players.

Being a leader is not a part time job. If Goodell holds the players to a high standard, he should be held to that same high standard!

- Brian Westbrook (@36westbrook) September 10, 2014$$$ will decide Goodell's fate. When the marketing $$ stop coming in things change. When the players like the NBA take a stand things change

- Brian Westbrook (@36westbrook) September 10, 2014A league executive, speaking early Wednesday before The Associated Press report was released, didn't believe the Rice controversy would cost Goodell his job -- unless the video was viewed beforehand.

"No," the executive told ESPN.com, "but if Goodell and the league saw the video beforehand, he is not commissioner in March for the league meetings."

League partner and hotel chain Marriott said it was "closely following the situation."

"We trust that the NFL will address the matter appropriately," a statement on Marriott's Twitter account said.

Meanwhile, Ravens owner Steve Bisciotti held a town hall-style meeting with employees Wednesday and encouraged them to ask questions about the organization's handling of the Rice situation, according to ESPN sources and a media report.

The AP's report followed news earlier in the day that Congress had begun shining a light on the NFL's handling of the situation, with 12 Democrats from the House Judiciary Committee, which oversees anti-trust legislation such as the 53-year-old broadcasting exemption granted to the NFL, having sent a letter to Goodell calling for greater transparency.

The letter also postulated that the NFL's prominence gives the league a special obligation to forcefully address issues of domestic violence.

U.S. senators from both parties echoed the committee's points.

"I fear the failure of the NFL to understand the scope and severity of this act of domestic violence has already led to significant damage for vulnerable members of society,'' Republican Sen. Dean Heller of Nevada said, adding that he was "highly disappointed'' that Goodell and the NFL did not take severe action against Rice until after the security video was made public.

"By waiting to act until it was made public you effectively condoned the action of the perpetrator himself,'' Heller wrote in his letter to Goodell. "I cannot and will not tolerate that position by anybody, let alone the National Football League.''

As a husband, father and player I'm embarrassed to be associated with the NFL right now!

"Recent reports that the NFL had the Ray Rice battering video point to Roger Goodell's burgeoning, insurmountable credibility gap," Blumenthal, D-Conn., said in the news release. "If these reports are true, Commissioner Goodell must go, for the good of the NFL and its fans. The current leadership of the NFL cannot be trusted to fairly, genuinely implement policies that address domestic violence.

"As Roger Goodell himself said several years ago when allegations arose that theNew Orleans Saintsoffered bounties for injuring opponents, 'ignorance is not an excuse.' The NFL has an obligation to do better, and a position of public trust -- benefiting from broad anti-trustexemptions granted by Congress, and hundreds of millions of dollars in taxpayer benefits. If these allegations are true, Roger Goodell is part of the problem, and he is incapable of achieving a real solution."

The Associated Press also reported it had been played a 12-second voicemail from an NFL office number on April 9 confirming the video arrived. A female voice expresses thanks and says: "You're right. It's terrible."

The law enforcement official, who the AP reported had spoken on condition of anonymity because of the ongoing investigation, said he had no further communication with any NFL employee and can't confirm anyone watched the video. He said he was unauthorized to release the video but shared it unsolicited because he wanted the NFL to have it before deciding on Rice's punishment.

Former linebacker Scott Fujita, who drew a suspension as part of the bounty scandal, took a big-picture view, after a recent mending of fences of sorts with Goodell through the ALS ice-bucket challenge.

And people, this isn't a one-person problem at all. It's a systemic issue dating back many many years.

"I don't know the full story," Brees said. "I don't know who all does, but I think that's what is trying to be found out here. But everyone deserves to be held accountable for their actions, because certainly that's the expectation for players."

Information from The Associated Press and ESPN.com's Mike Triplett and Mike Sando was included in this report.

Game Over For Goodell?
Kate Fagan and William Rhoden discuss whether Roger Goodell should resign as commissioner of the NFL.

Will Owners Stand By Roger Goodell?
Adam Schefter reacts to a statement made by an anonymous NFL team owner that said if the AP story is true, no owner will support commissioner Roger Goodell.

The NFL Got The Tape, Goodell Must Be Fired
A startling AP report states that the NFL was sent the Ray Rice tape in April. This only adds to the fact that Roger Goodell should not resign...he should be fired. Keith Olbermann explains.

Level Of Confidence In Roger Goodell
Bill Polian discusses his level of confidence in commissioner Roger Goodell and talks about the investigation former FBI director Robert Mueller will conduct.

Cossack On Video Report
ESPN legal analyst Roger Cossack discusses the ramifications based on the report that a law enforcement official sent the Ray Rice tape to a NFL executive in April.

Is Roger Goodell In Trouble?
Chris Mortensen breaks down the potential ramifications for Roger Goodell and the NFL in reaction to the news that a law enforcement official said the recently surfaced video of Ray Rice hitting his then-fiance was sent to the NFL in April.