Roger Clemens: Out of my control 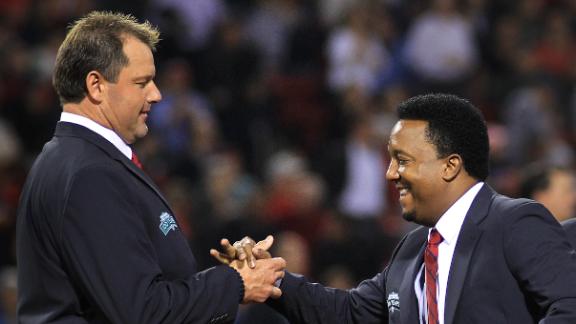 Martinez, who has always been outspoken about players accused of using performance-enhancing drugs, was careful when answering the question but did not shy away from those allegations in regards to Clemens and Bonds.

"With all due respect to everybody that votes, I'll have to say Roger and Barry Bonds are two guys that I think had enough numbers before anything came out to actually earn a spot in the Hall of Fame," Martinez said. "I'm not quite sure 100 percent how close they will be before all the things came out, but in my heart, if you asked me before any of that, I would've said, 'Yes, 100 percent,' without looking back.

"It wasn't just the individual performances. [It was] how they dominated the time that they came up and stayed in the big leagues until those things happened. I believe they have a legit chance, and I think, with time, the voters will take into consideration what they did previously."

Martinez, along with Clemens, Nomar Garciaparra and broadcaster Joe Castiglione, was inducted Thursday into the Red Sox Hall of Fame.

Clemens, who said he would have changed "nothing" about his career, dismissed any talk about the Hall of Fame, adding that it was out of his control.

"I don't know if it's that important," Clemens said. "It's not going to change me as a person. I tell people I've got bits and pieces of us there now. We go visit those people and they're great to us, but it's not something I sit up and worry about every day.

"I'm far too busy to worry about something like that. I know what I did in my career and how I did it, and I did it right. I can't control what people think or people that don't look at facts."

Clemens did say that if he was voted into Cooperstown he would wear a Red Sox hat.

"Obviously it will be Boston because I spent most of my time here," Clemens said.