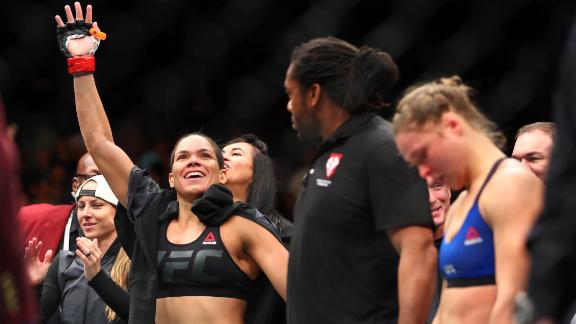 A day after losing to bantamweight champion Amanda Nunes at UFC 207 in Las Vegas, Ronda Rousey said she will "need to take some time to reflect and think about the future."

"I want to say thank you to all of my fans who have been there for me in not only the greatest moments but in the most difficult ones. Words cannot convey how much your love and support means to me," Rousey said in a statement provided to ESPN.

"Returning to not just fighting, but winning, was my entire focus this past year. However, sometimes -- even when you prepare and give everything you have and want something so badly -- it doesn't work how you planned. I take pride in seeing how far the women's division has come in the UFC and commend all the other women who have been part of making this possible, including Amanda.

"I need to take some time to reflect and think about the future. Thank you for believing in me and understanding."

The fight against Nunes marked Rousey's first appearance in the Octagon since losing to Holly Holm at UFC 193 in November 2015.

The 135-pound championship fight Friday night headlined UFC 207 at T-Mobile Arena, but it was over quickly.

Referee Herb Dean stopped the fight just 48 seconds in. Rousey did not go unconscious, as she did from Holm's head kick, but she was essentially out on her feet. It marked the fastest knockout finish of Nunes' 14-4 career.

Rousey, 29, walked out of the Octagon without assistance. She did not address the cameras or media afterward.

Information from ESPN's Brett Okamoto was used in this report.