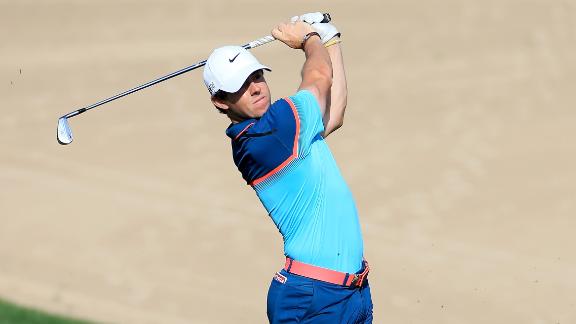 DUBAI, United Arab Emirates -- An unrelenting Rory McIlroy secured his second Dubai Desert Classic title in six years with a 2-under 70 in the final round to win by three shots on Sunday.

The Northern Irishman's 22-under 266 total matched the lowest in the history of the tournament, set by Stephen Gallacher in 2013 and Thomas Bjorn in 2001.

The top-ranked McIlroy, whose win here in 2009 was his first as a professional, made just three birdies Sunday but kept mistakes off his card. His only bogey of the round came on the par-3 seventh hole at Emirates Golf Club's Majlis course.

"I just wanted to keep my ball in play and not really make any mistakes and try and pick off some birdies when I could on the par 5s," McIlroy said.

"I did what I needed to do. It wasn't the best round that I've played this year but I got the job done and that's the most important thing."

Sweden's Alexander Noren, making a comeback from a wrist injury which restricted him to playing just two events in 2014, had eight birdies in his round of 65 to take second place at 19-under 269.

"I never even thought of winning, Rory's playing so good," said Noren, who started the year ranked 654th.

Defending champion Gallacher closed with a 69 to give the Scot third place at 16-under 272.

The $2.5 million tournament forms the closing leg of the three-stop Desert Swing of the European Tour.