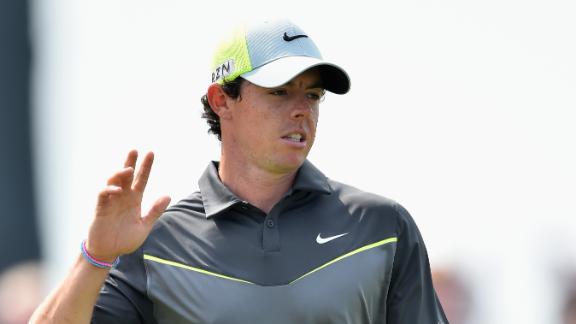 HOYLAKE, England -- Rory McIlroy cast aside any talk of those second-round doldrums with a performance at Royal Liverpool that threatened to turn this into another major championship runaway.

As for Tiger Woods, he was fortunate just to make the cut at the Open Championship.

Any hopes of a duel between the guy who once ruled golf and the player most likely to take his place as the face of the game quickly faded Friday as McIlroy romped to a 6-under 66 that gave him a commanding lead heading into the weekend.

This is starting to look like his first two major victories, both by eight shots, at the 2011 U.S. Open and the 2012 PGA Championship.

Woods used to know that feeling.

Not on this day. In his first major of the year after undergoing back surgery, Woods showed his rust by struggling to a 77, his worst round at the Open Championship since that 81 at stormy Muirfield in 2002. A triple-bogey at the 17th nearly sent him home for the weekend, but a delicate chip over a pot bunker at the 18th set up a 6-foot putt that gave him his only birdie of the day.

It was just enough to keep him around for the weekend.

He's got almost no chance of catching McIlroy, trailing the leader by a whopping 14 shots, though Woods did bring up Paul Lawrie rallying from 10 shots down on the final day to catch Jean Van de Velde at Carnoustie in 1999.

Of course, that would require McIlroy falling apart the way Van de Velde did.

What are the chances of that?

"I'm pretty far back," Woods conceded. "Hopefully I can play well and give myself a shot going into the back nine on Sunday."

McIlroy's matching 66s gave him a 36-hole total of 12-under 132 -- the same score that Woods posted at the midway point of his last Open victory in 2006, at this very same course along the Irish Sea.

There were no more questions about the strangest quirk in McIlroy's year -- a mysterious run of high scores in the second round, which no one could explain but which had admittedly gotten in his head.

The 25-year-old from Northern Ireland wiped those thoughts away by the time he went out for an afternoon round at Hoylake, where the weather again worked in favor of his end of the draw. Playing early Thursday, McIlroy benefited from pristine conditions. On Friday, the wind howled in the morning but settled after lunchtime, taking away the primary defense of a links course.

Through the first two rounds, McIlroy has made only one bogey -- at the first hole Friday. That was long forgotten by the time he closed with three easy-as-can-be birdies over the final four holes, looking as though he barely broke a sweat on a sunny, sticky day.

"It is not a surprise what Rory is doing," Woods said. "He plays pretty aggressively to begin with, and when he is going, he can get it going pretty good."

Dustin Johnson was McIlroy's closest challenger, claiming a spot in Saturday's last group with the best round of the tournament so far, a 65 that left him at 136.

No one else was within six shots, though there's plenty of star power in the group at 138 with former Masters champion Charl Schwartzel, young gun Rickie Fowler and perennial major challenger Sergio Garcia, who's still seeking the signature win of his career after all these years.

Worried about an approaching storm that is forecast to strike Royal Liverpool on Saturday afternoon, the R&A announced it will have players tee off from both the first and 10th holes for the first time in the history of golf's oldest major.


McIlroy, who had plenty of birdies on his card, had another that wanted to horn in on the action. As McIlroy lined up a birdie putt on the eighth green, a pheasant strolled into his path. He shooed it away with help from his caddie -- and rolled the ball right into the cup."I haven't run into that before on the golf course," McIlroy said. "I might have had a swan or a duck or a geese or something. Never a pheasant. But it was nice. It didn't put me off."

Nothing does, it seems.