Rousey: Could beat 'anyone,' including Mayweather, in no-rules fight 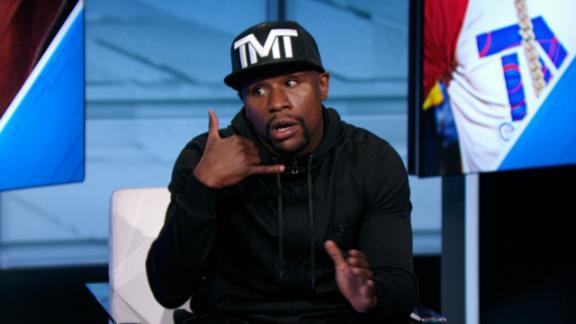 Ronda Rousey refused to back down in her bitter feud with Floyd Mayweather when asked about the task of facing him in a no-rules fight, the latest jab in her public verbal slugfest with the pound-for-pound boxing champion.

On Monday night when she was asked by a fan in anAsk Me Anything chat on Reddit whether she could take Mayweather in a no-holds-barred bout, Rousey did not pull any punches.

"Floyd is one of the best boxers of all time," said Rousey, the UFC female bantamweight champion. "He would definitely beat me in a boxing match. I unfortunately don't get into 'matches.' I fight for a living.

"In a no-rules fight, I believe I can beat anyone on this planet," she said. "Boxing is a sweet science with strict rules that I respect very much and aspire every day to improve at. But you said ruleless fight, and that's my honest answer."

Rousey's comment comes almost a month after shetold reporters after winning an ESPY award for Best Fighter, for which Mayweather was a nominee: "I wonder how Floyd feels being beat by a woman for once. I'd like to see him pretend to not know who I am now."

Rousey said she had been waiting for the right opportunity to call out Mayweather, who in a July 2014 interview said of her, "I don't even know who he is."

"I know for damn sure he knew who I was," Rousey told reporters after winning her ESPY. "He was running against me for Best Fighter that year, and he had signed MMA fighters, so his feigned ignorance was meant to really be a snarky remark to me.

"I don't let those kind of things slide, but I'm also a patient girl. I'm not the kind of chick you make snarky remarks about. I waited a whole year to say something. And you know what? If I didn't win Best Fighter this year, I would have waited two years or three years."

Rousey (12-0) is the only women's bantamweight champion in the UFC's history. A two-time U.S. Olympic judoka, she has dominated her new sport. She defended her title by knocking out Bethe Correia only 34 seconds into the first round at UFC 190 in early August.

Rousey is widely seen as a fighter who is redefining the sport and has won 11 of her 12 fights in the first round, going into the third round once.