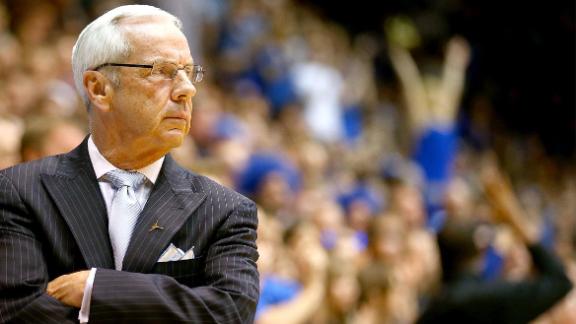 It has been more than 11 years since Roy Williams set foot inside Allen Fieldhouse, and it's become abundantly clear in the seasons since just how he feels about North Carolina.

Despite all that time away from Kansas, however, the Tar Heels coach insists one thing has never waned: There's still no place like the Jayhawks' home.

On Monday, as Kansas stages "Celebrating 60 Years," Williams will be among the guests of honor when the Jayhawks fraternity gathers in recognition of six decades of basketball in the Phog. He will be joined by former coaches Ted Owens and Larry Brown, as well as current coach Bill Self, who conceived the event along with his wife, Cindy.

"I haven't actually been in Allen Fieldhouse since the last practice before we went to the Final Four in 2003," Williams told the Kansas City Star. "I've said this, and I really believe this from the bottom of my soul: I think it's the greatest home-court advantage in college basketball and maybe in any sport, whatsoever."

Williams' departure from Kansas, of course, was the stuff of legend. Time has healed many of the wounds that festered for years, and Self says he sees the event as a chance to put the focus on Williams' 15 seasons in Lawrence.

"What a way to come back publicly, to all cheers in a noncompetitive situation, at a place that means an awful lot to you," Self said. "I think it will be great for all the coaches, but I think it will be extra special for him."

The Heels have won two national titles with Williams, but the coach established himself as one of the nation's best at Kansas, and the team's success at home was the driving force behind that.

Williams was 201-17 at Allen. At 92 percent, it was the best winning percentage there among coaches with at least 100 games -- until Self came along and won 95 percent of his home games over the past 11 seasons.

"There is some mystique up there," Williams said. "We're not Irish by any means, but if you could say that, there'd be leprechauns on every rim helping the other team's shots bounce away."