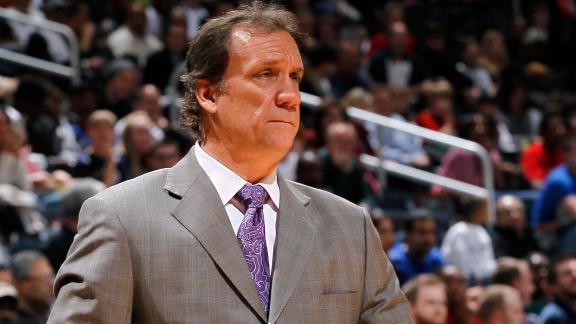 Point guard Ricky Rubio, in Italy for an appearance at the adidas Eurocamp, said Sunday he plans to call teammate Kevin Love in the next few days to try to find out why the star forward wants to leave the Minnesota Timberwolves.

In an interview with NBA.com on Sunday, Rubio said he will travel to Los Angeles on Monday to train with his new shooting coach but he also will make a phone call to Love once he's back in the United States.

"I don't want to convince him if he doesn't want to stay. But I want him to stay and I'm going to tell him what I think, which is we've been improving every year and he's a great player, he helps us a lot," Rubio told NBA.com. "I think we need to make the next step. ... The media says it's pretty settled, but I don't know what he thinks. What I've been hearing is from the media, not from him, so I don't trust that. It can be an opinion from you guys. I just really want to talk to him as a teammate."

If Love does end up leaving the Timberwolves in a trade, Rubio said that alone wouldn't prompt him to also want out of Minnesota. But he made it clear he doesn't want to be part of a rebuilding effort in Minnesota.

"If he leaves, it's going to be painful because he's a main guy. But it depends what we get back for him," Rubio told NBA.com. "We'll see what we can do. I don't think going through a rebuild year is going to help us because we've been improving every year and now we're so close to making the playoffs that it doesn't make sense to rebuild it again. It's not continuing what we were doing."

On Saturday, Wolves president, part-owner and new coach Flip Saunders said in a radio interview that Love has no right to be frustrated over the Timberwolves' lack of recent success.

Sources reiterated to ESPN.com's Marc Stein on Thursday that Saunders' move back to the bench will have no impact on Love's determination to opt out of his contract and become an unrestricted free agent in 2015.

Saunders and Love have built a good relationship since Saunders replaced David Kahn as Minnesota's lead decision-maker, but sources tell ESPN.com that Love is determined to play for a contender after missing the playoffs in each of his first six NBA seasons. His concern, sources say, isn't who's coaching but the state of the roster.

ESPN.com reported earlier this month that the Golden State Warriors and Chicago Bulls are two potential trade destinations that particularly intrigue Love in his quest to land with a team that can make some noise. The Houston Rockets, Boston Celtics, New York Knicks, Los Angeles Lakers and Phoenix Suns are among the other teams, sources say, that have tried to engage the Wolves in exploratory trade talks.

Saunders To Coach Timberwolves
Marc Stein discusses the report that Timberwolves president and part-owner Flip Saunders has decided to coach the team and the impact it could have on Kevin Love.