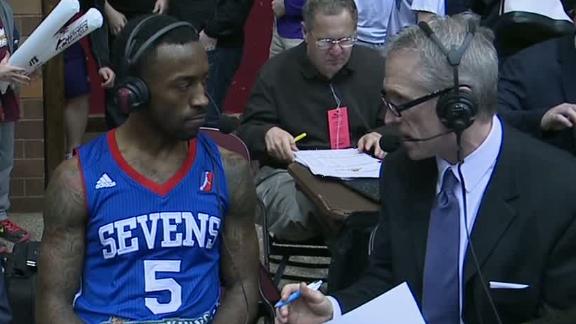 Smith made just 1 of 5 3-point attempts in 44 minutes against Canton but went 16-of-20 at the free throw line and scored 32 of his points on layups.

He credited his aggressive play for the record-setting night.

"I tried to get in the lane," said Smith, who rounded out his efforts with six rebounds, four assists and two steals. "The last game (against Canton), I think I had about 18 assists, and I didn't play that whole third quarter because of foul trouble, so the lane was going to be open. I read the scouting report. The big guys were so worried about the lob that I just floated in, and I kept getting layups.

"I just sort of did my homework, and I really circled this game on the calendar because Canton's a good team. They have some good players. They play tough. It was just a good one."

Jordan McRae, a former Tennessee standout, set the previous record of 61 in January, also for Delaware.

Of course, this wasn't Smith's first big moment on the court. A former All-American at Louisville, he helped guide the Cardinals to the 2013 national title under coach Rick Pitino.

"I was looking forward to winning," Smith said of Wednesday night's result. "I've been a winner all my life."

Smith was a second-round pick of the 76ers in the 2014 draft. He is currently No. 1 on the D-League's "Prospect Watch," a list of players in the league who are eligible to be called up.

A 6-foot guard from New York, he has spent some time in the NBA the past two years, including 15 games for the Memphis Grizzlies this season before he was waived in December.