Russell Westbrook: It's on all of us 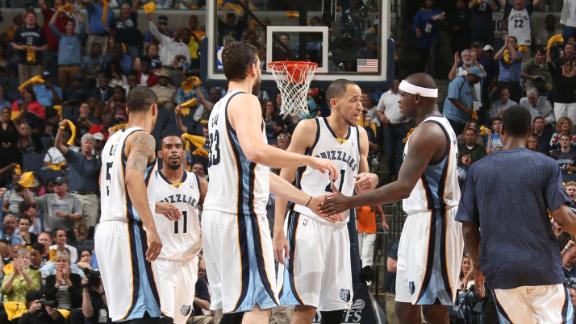 MEMPHIS, Tenn. -- Russell Westbrook said media are trying to pull him apart from his teammates by questioning the team's shot selection during the Oklahoma City Thunder's first-round series with the Memphis Grizzlies.

The Grizzlies took a 2-1 series lead Thursday after an overtime victory in which Westbrook had just two assists in 39 minutes. Kevin Durant had three in 50 minutes, and the two had a second consecutive off shooting night, combining to go 17-of-53 after going a combined 23-of-56 in a Game 2 overtime loss.

"I feel like [the media] tries to pull us apart," Westbrook said Friday. "When nobody is getting their shots, you all try to find a reason in between all of us. You try to find whose fault it is. One person didn't lose, we all lost."

Durant and Westbrook have combined to shoot just 41 percent in the series. Ibaka is shooting 60 percent.

When the Thunder made their 17-point comeback in the fourth quarter of Game 3, it started after Thabo Sefolosha was fouled on a 3-pointer, and Kendrick Perkins and Ibaka made baskets. Over the game's last 11 minutes, Durant and Westbrook took every shot but two.

"We have to be better," Durant said. "Maybe we are shooting too much, but we're going to stay aggressive no matter what anybody says."

Durant and Westbrook are typically the Thunder's main offensive weapons, and they have taken a heavy majority of the shots late in close games. On Friday, Westbrook made it clear that will continue.

"Nobody is perfect -- not me, not Kevin, not anybody," Westbrook said. "You want your teammates to make shots, but when the game is on the line you've got to make decisions."

Westbrook also downplayed a tweet sent out by his brother, Ray, that called for the Thunder to change coaches after the Game 3 loss.

"I took care of that," Westbrook said. "We don't conduct business like that.

"Me and Scotty have a great relationship and I've never once mentioned I want Scotty to leave here since I've been here. We've created a bond."