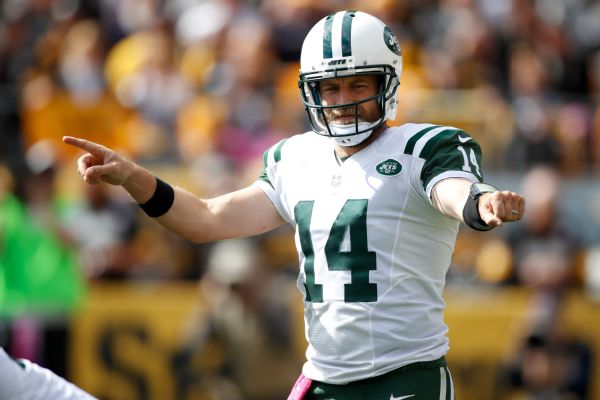 ESPN
By Rich Cimini
EAST RUTHERFORD, N.J. -- Geno Smith got hurt and Ryan Fitzpatrick got mad, calling out team brass after coming off the bench to rally the New York Jets to a 24-16 victory over the Baltimore Ravens on Sunday at MetLife Stadium.

Smith started his first game since Dec. 28, 2014, but he twisted his right knee on a second-quarter sack and left the game. He will have an MRI exam on Monday.

"Something just felt funny when I got up," Smith said. "I don't think it will be anything too significant, but we'll see."

Coach Todd Bowles said it's "too early to tell" if Smith will be healthy enough to start next Sunday versus the Browns.

Fitzpatrick, in the unfamiliar role of relief pitcher, entered the game with the Jets trailing 13-7in the second quarter. On his first series, he went 4-for-4, including a 13-yard scoring pass to Matt Forte to culminate an 85-yard drive.

"I probably play better as an underdog, pissed off, so going forward, yeah, I'll be pissed off," he said.

Fitzpatrick learned of his demotion on Tuesday, the day after Bowles gave him a public vote of confidence following a Monday night loss to the Arizona Cardinals -- the Jets' fourth straight defeat. The quarterback leads the leaguewith 11 interceptions.

Owner Woody Johnson told the NFL Network he was fully supportive of Bowles' decision to bench Fitzpatrick, who signed a one-year, $12 million contract on the eve of training camp.

Clearly, Fitzpatrick was stung by the benching.

Asked about the perceived lack of support from the brass, he said, "When you get put on the bench, I think that's the reason why. People giving up on you, and then having to see them every day, that stuff is not necessarily the easiest in the world, but it's something that you try to deal with as mature as you can and move on."

Fitzpatrick got the call when Smith, after only 24 plays, retreated to the bench and started complaining about his knee. Fitzpatrick knew he was headed back to the huddle.

"Yeah, unless they wanted to go to Wildcat, I thought I'd be the guy," he said, smiling. "But it's a pretty ironic situation."

Sunday's injury was another blow for Smith, who said he was "begging" to go back in the game.

"That's how stuff works, man," said Smith, who completed 4 of 8 passes for 95 yards and a touchdown. "That's how life works. I'm not thinking about that right now. I'm just happy that we won. I'll be fine, but we'll see how it goes."